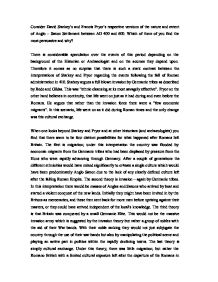 Consider David Starkey(TM)s and Francis Pryor(TM)s respective versions of the nature and extent of Anglo &quot; Saxon Settlement between AD 400 and 600. Which of them of you find the most persuasive and why?

Consider David Starkey's and Francis Pryor's respective versions of the nature and extent of Anglo - Saxon Settlement between AD 400 and 600. Which of them of you find the most persuasive and why? There is considerable speculation over the events of this period depending on the background of the Historian or Archaeologist and on the sources they depend upon. Therefore it comes as no surprise that there is such a stark contrast between the interpretations of Starkey and Pryor regarding the events following the fall of Roman administration in 410. Starkey argues a full blown invasion by Germanic tribes as described by Bede and Gildas. This was "ethnic cleansing at its most savagely effective". Pryor on the other hand believes in continuity, that life went on just as it had during and even before the Romans. He argues that rather than the invasion force there were a "few economic migrants". In this scenario, life went on as it did during Roman times and the only change was this cultural exchange. When one looks beyond Starkey and Pryor and at other historians (and archaeologists) you find that there seem to be four distinct possibilities for what happened after Romans left Britain. The first is migration; under this interpretation the country was flooded by economic migrants from the Germanic tribes who had been displaced by pressure from the Huns who were rapidly advancing through Germany. After a couple of generations the different ethnicities would have mixed significantly to cr4eate a single culture which would have been predominately Anglo Saxon due to the lack of any clearly defined culture left after the falling Roman Empire. ...read more.

By looking at these alongside the modern techniques and the archaeology we can get a fairly accurate picture of what could have happened. Henson has done a good start with this book "The origins of the Anglo - Saxons" in which he has collated all the data from Gildas, Bede and the A.S.C. This information is used below to lay out a rough idea of what happened during that period. In 410, Roman Soldiers left Britain due to pressures affecting Rome itself. After several Saxon raids and increasing pressure from the Picts and the Scots (and with the refusal of any help from Rome) it was decided to hire Germanic mercenaries in 428. In 430, Hengest returned to Britain with his Son Octa and more mercenaries to defend the north from the Picts. Hengest married his Daughter off to Vortigern in return for Kent. Around 433, Diplomacy breaks down between the Britons and Hengest, resulting in a war. In 435 0 all German mercenaries under Hengest were expelled and returned to Germany. Around 444 Amrbosius takes over the leadership of the fight against the Saxons. Aurelianus became leader for 32 years. After his death, his brother Uther succeeded him and fought a further war with Octa and defeats him at Verulamium between 488 and 491. In 495 Arthur (The mythical status of Arthur is disputed however it appears that there was some sort of successful leader around this time who is referred to as Arthur) succeeded his father and continued the fight leading to a decisive victory over the Saxons at Badon Hill around 499. This led to a stop in the Anglo Saxon advance, and was the last country wide native poltical ruler. ...read more.

Not surprisingly, the Anglo Saxons start to make large advances through the country. By 575 the east is secure and movement through the west is still progressing. Using the Settlement evidence found at West Heslerton which like many other Anglo Saxon settlements does not have any form of defence of palisade suggests that the Anglo Saxons felt secure in this area. The warriors are followed by a large number of economic migrants which set up large trade routes between Britain and their former native countries. This accounts for the density in material which is found. The Anglo Saxons have control of Britain until 1066. In conclusion, it can be seen that the picture concerning Britain during this time is much more complex than merely invasion or migration. It is a case of tribal politics, a falling Empire and a vacuous people who have little culture and even less ability of defence. The inviting of Anglo Saxons to act as mercenaries spells the end of Romano Britain. However, even with all modern technology, techniques and expertise, there is still a lot more myth and speculation concerning this time period than fact, and that is probably going to be the case forever. Kemble in 1849 said in despair "from what has preceded it will be inferred that I look upon the details of the German conquests in England as irrevocably lost to us".5 1 Book VI of De Bello Gallico - Caesar - http://www.fordham.edu/halsall/source/51caesar-germans.html 2 Taylor, A. "Burial practice in Early England" 3 http://www.britarch.ac.uk/ba/ba23/ba23feat.html#evison 4 BBC News - Wed 17th March, 2004 - Teeth unravel Anglo - Saxon legacy. 5 Kemble as quoted in Henson, D (2006) - "The origins of the Anglo - Saxons" 233 ?? ?? ?? ?? ...read more.