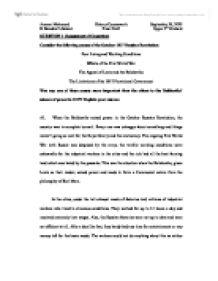 Consider the following causes of the October 1917 Russian Revolution:

QUESTION 1 (Assessment of Causation) Consider the following causes of the October 1917 Russian Revolution: Poor Living and Working Conditions Effects of the First World War The Appeal of Lenin and the Bolsheviks The Limitations of the 1917 Provisional Government Was any one of these causes more important than the others to the Bolsheviks' seizure of power in 1917? Explain your answer. A1. When the Bolsheviks seized power in the October Russian Revolution, the country was in complete turmoil. Every one was unhappy about something and things weren't going so well for the Royal family and the aristocracy. The ongoing First World War with Russia was despised by the army, the terrible working conditions were unbearable for the industrial workers in the cities and the rich had all the best farming land which was hated by the peasants. This was the situation when the Bolsheviks, given Lenin as their leader, seized power and made to form a Communist nation from the philosophy of Karl Marx. ...read more.

Even before the war everyone knew that Russia was not ready and the majority had the perception that Russia was forced into a war with Germany because of Serbia. When the war started, it was greeted with some enthusiasm but it soon became clear that the Russian industry was too far behind the standards of the time and could not cope with an expensive war. The army was not well supported or equipped to fight the more advance German forces and was often short of rifles and ammo. The final blow came after an all-out failed offensive in July 1917 when, because of two arrogant officers and their personal dislike for each other, half a million Russian soldiers were slaughtered by about 200,000 German ones. This was one of the events that the Bolsheviks promoted and it added immensely to their support. Lenin, real name Vladimir Illich Ulyanov was a very gifted public speaker and was exceptional good at arousing crowds and lifting spirits. ...read more.

He did not distribute the rural lands between the peasants which meant that he did not really understood the need of the poor and 2) He kept Russia in the war, which was probably his biggest mistake and an unexpected decision as almost every one in Russia hated the war. Although he did make reforms to improve life for the people but these were limited. After a while, it was understood that this Provisional government was incapable of understanding the common man's need. I think that all the causes of the October Revolution were equally important for Lenin and the Bolshevik's seizure of power as the Revolution wouldn't have worked without any of them. Altogether, the causes made a 'mood for revolution' and put a yearning for change in the hearts of men. They made the people against the monarchy and the Provisional government and, combined with the Bolsheviks' ruthless methods, gave them an open path to leading Russian into becoming a true Communist state. ?? ?? ?? ?? Ammar Mahmood History Coursework September 26, 2005 St Benedict's School Final Draft Upper 5th Orchard ...read more.