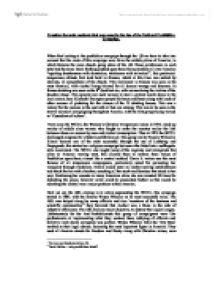 Consider the main methods that were used in the rise of the National Prohibition Campaign. When first looking at the prohibition campaign through the US we have to take into account that the roots of this campaign were from the middle plains of America, in which features the more church going states of the US. These parishioners in each state had the same literal thinking pushed upon them from preachers all over America "equating drunkenness with damnation, abstinence with salvation1", this puritanical temperance attitude first took hold in Kansas, which at this time was settled by idealists, all sympathetic of the church. This movement in Kansas was seen as the most fanatical, with alcohol being blamed for all demon wrongs and diseases. In Kansas drinking was seen as the 8th deadliest sin, with women being the victims of the drunken abuse. ...read more.

The WCTU also taught many of the vagrants and immigrants that came to America moving west, this allowed them to enforce there values of Prohibition upon them, almost like a control method. Carrie A. nation was the most famous of all temperance campaigners, particularly noted for promoting her viewpoint through vandalism. Nation would enter an alcohol-serving establishment and attack the bar with a hatchet, smashing all the stock and furniture that stood in her way. Continuing her crusade in many American cities, she was arrested 30 times for disturbing the peace, however never could be prosecuted further as that would be admitting the alcohol was a major problem within America. Next we see the ASL coming in to action superseding the WCTU, this campaign started in 1893, with the famous Wayne Wheeler as its most successful voice. ...read more.

Also with this came the law that men in uniform could not enter a saloon, even if abroad fighting. The war with Germany added a lot of suspicion to the German brewers and saloon owners, giving a heightened feeling of Xenophobia, one such writer called them Germany's secret army. Towards the end of the world war in January 1918 prohibition was put to the vote, along with the feeling of patriotism if you voted yes. Prohibition was no seen as the righteous solution to America, this was the vote that called for the 18th amendment on the 16th of January 1918, however the amendment itself did not ban the actual consumption of alcohol, but made obtaining it legally difficult. 1 Fervour and fanaticism (line 15) 2 David Hellier - why prohibition failed? 3 http://en.wikipedia.org/wiki/Prohibition_in_the_United_States ...read more.