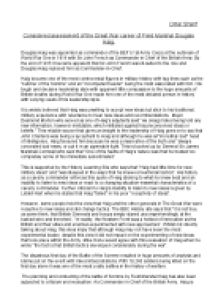 ﻿Omar Sharif Considered assessment of the Great War career of Field Marshal Douglas Haig. Douglas Haig was appointed as commander of the BEF's 1st Army Corps at the outbreak of World War One in 1914 with Sir John French as Commander in Chief of the British Army. By the end of 1915 it became apparent that Sir John French was ill-suited to the role and Douglas Haig replaced him as Commander-in-Chief. Haig became one of the most controversial figures in military history with tag-lines such as the "butcher of the Somme" and an "incompetent leader" being the most associated with him. His tough and decisive leadership style with apparent little compassion to the huge amounts of British deaths during World War One made him one of the most debated person in history with varying views of his leadership style. It is widely believed that Haig was unwilling to accept new ideas but stick to his traditional, military experience with reluctance to hear new ideas and recommendations. Major Desmond Morton who served as one of Haig's adjutants said "He (Haig) hated being told any new information, however irrefutable, which militated against his preconceived ideas or beliefs." This reliable source that gives an insight to the leadership of Haig goes on to say that John Charteris was being a sycophant to Haig and although he was an"incredibly bad" head of intelligence, Haig favoured him because he was conservative of the truth and "always concealed bad news, or put it in an agreeable light. This is backed up by General Sir James Marshall-Cornwall who said that "One of the faults of Haig's nature was that he trusted too completely some of his immediate subordinates". This is supported by the History Learning Site who says that "Haig had little time for new military ideas" and "was steeped in the ways that he knew-conventional tactics". His history as a cavalry commander enforces this quote of Haig sticking to what he knew best and an inability to listen to new ideas or react to a changing situation-essential characteristics of a cavalry commander. ...read more.

Stone points out that he believed this was probably the error in the planning of the Somme. After the catastrophic first day of the battle, questions were being asked about why to continue with the battle, why should Haig risk another 20,000 British lives? Martin Gilbert says that "the Germans knew that the British would not give up". It was part of the British spirit and would not honour the 20,000 already killed to simply give up. It also didn't comply with Haig's determination to fulfil his task of winning the war. Questions regarding the planning of the battle also arose- why was the wire not cut? Why were the Germans still alive after such heavy bombardment? Was it an British failure of a German success and who should ultimately be blamed for the deaths of so many innocent soldiers? Some people like Desmond Morton believe that figures such as John Carteris who was head of intelligence was "incredibly bad" and sycophant nature of his relationship with Haig led to incorrect predictions that formed Haig's plans. The overestimated results of the British bombardment by British generals is extremely clear by Martin Gilbert's description of what British soldiers had to carry and what they were expecting. They carried " a rifle with fixed bayonet, between 170 and 220 rounds of small arms, two grenades, a waterproof cape(although it was a beautiful summers day), two sandbags, a steel helmet, two gas helmets, a pair of google against tear gas, a first aid field dressing and iodine, waterproof groundsheet, filled water bottle, haversack, mess tin, towel, shaving kit, extra socks, message book, uneaten rations, extra cheese, one preserved and one iron ration. In addition 40% would carry shovels and 10% would carry picks and one battalion was given a tin of grey paint each. This resulted in about sixty-six pounds of equipment. Historian General Edmonds wrote "the weight of this equipment made it "difficult t get out of a trench, impossible to move much quicker than a ...read more.

The British Naval Blockade led to food shortages in Germany and subsequent protests on the streets of Berlin. October 1918 saw the resignation of German commander Ludendorff and a naval mutiny. Kaiser Wilhelm II then abdicated on November 8th 1918 and an armistice was signed on November 11th 1918. The controversial leadership of Field Marshal Haig throughout the Great War is subject to so many different views and opinions by different historians, making an informed assessment on his leadership is extremely challenging. However, I do believe that the infamous catastrophic first day of the Somme was down to poor intelligence, predictions and overestimation. Men were sent to their deaths in appalling conditions whilst I do not think that Haig was solely to blame, I do believe that his distinct leadership style was not suited to the planning of the Somme and as commander in chief he does have overall responsibility for the safety and wellbeing of all men in the Army. However, his leadership style fitted the circumstances of the final year of the great war. 1918 saw circumstances requiring decisive, quick and dictatorial actions at a time when German defences were weak and rapid advancements needed to be made. Haig played an incredibly important role in the final year which ultimately led to allied victory along with the help of the fresh American soldiers. In Conclusion, I believe that Field Marshal Haig had an incredibly unique leadership style that only fitted the final phases of the war. The inability to listen to new ideas and dictatorial style during the Battles of Somme and Passchendaele I believe led to the deaths of tens of thousands of innocent soldiers. Poor intelligence also contributed to the immense disaster of the first day of the Somme. Whilst Haig has a duty to take responsibility forthe deaths of British soldiers I certainly believe that a number of factors contribute to both the successes and failures of the Great War and no single person or factor can take overall responsibility. ...read more.