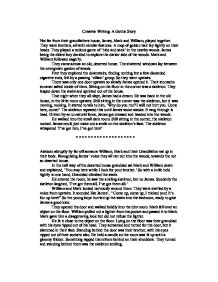 Creative Writing: A Gothic Story Not far from their grandfathers house, James, Mark and William, played together. They were brothers, all with similar features. A mop of golden hair lay lightly on their heads. They played a tedious game of 'hide and seek' in the nearby woods. James being the eldest boy decided to explore the darker side of the woods. Mark and William followed eagerly. They came across an old, deserted house. The shattered windows lay between the overgrown garden of weeds. First they explored the downstairs, finding nothing but a few discarded cigarette ends, left by a passing 'villain' group. So they went upstairs. There was only one door upstairs so slowly James opened it. ...read more.

They opened the door and walked boldly into the dim room. Mark fell over an object on the floor. William pulled out a lighter from his pocket and passed it to Mark. Mark gave him a disapproving look but did not refuse the lighter. He lit it close to the object on the floor. Lying on the floor was their granddad with his eyes ripped out of his head. They screamed and turned for the door, but it slammed in their face. Standing behind the door was their brother, with his eyes ripped out of their sockets also. He held a candle so the room was lit up with a gloomy flicker. Something tapped them from behind on their shoulders. They turned and standing behind them was the skeleton smiling. By Cathy Westcott ...read more.