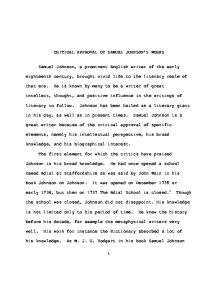 CRITICAL APPROVAL OF SAMUEL JOHNSON'S WORKS Samuel Johnson, a prominent English writer of the early eighteenth century, brought vivid life to the literary realm of that era. He is known by many to be a writer of great intellect, thought, and positive influence in the writings of literary to follow. Johnson has been hailed as a literary giant in his day, as well as in present times. Samuel Johnson is a great writer because of the critical approval of specific elements, namely his intellectual perspective, his broad knowledge, and his biographical interest. The first element for which the critics have praised Johnson is his broad knowledge. He had once opened a school named Edial at Staffordshire as was said by John Wain in his book Johnson on Johnson. It was opened on December 1735 or early 1736, but then on 1737 The Edial School is closed.1 Though the school was closed, Johnson did not disappoint. His knowledge is not limited only to his period of time. He knew the history before his decade, for example the metaphysical writers very well. His work for instance the Dictionary absorbed a lot of his knowledge. As M. J. C. Hodgart in his book Samuel Johnson and his Times says, "The quotations in the Dictionary show how widely and carefully Johnson had read in the seventeenth-century scientist, from Bacon to Newton, and specially in those of the great age of the Royal Society, which had ended before his birth, in Boylem Glanvill, and Ray. ...read more.

As M. J. C. Hodgart believes that "He established himself as the popular image of a practical Christian, charitable and humane, and of a stern and kindly teacher ... he set an example to hundreds who met him and thousands who read his works and life."9 In his moral writing, he boldly exposed the mankind fear that is the obvious facts. He presented all the details whether the pleased facts or the forgotten facts. As said by Bate that "The catharsis, or relief, as in all good drama, lies in the fact that nothing is being disregarded as he walks toward the forgotten obvious." As of Johnson's broad knowledge and his moral values, his biographical interest made him a great writer. Perhaps the most important element for which the critics have praised Johnson is his biographical interest. According to Isobel Grundy, the biography was vital in the realm of literature as he had this to say about it: "No species of writing seems more worthy of cultivation than biography, since none can be more delightful or more useful, none can more certainly enchain the heart by irresistible interest or more widely diffuse instruction to every diversity of condition..."10 Today, Johnson's biographies ranks among the top of the literary charts in both sales and production. ...read more.