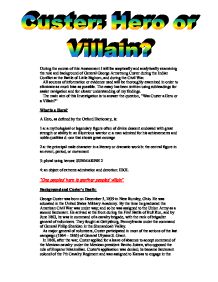 During the course of this Assessment I will be sceptically and analytically examining the role and background of General George Armstrong Custer during the Indian Conflict at the Battle of Little Bighorn, and during the Civil War. All sources of information or evidence used will be thoroughly examined in order to eliminate as much bias as possible. The essay has been written using subheadings for easier navigation and for clearer understanding of my findings. The main aim of this Investigation is to answer the question, "Was Custer a Hero or a Villain?" What is a Hero? A Hero, as defined by the Oxford Dictionary, is: 1 a: a mythological or legendary figure often of divine descent endowed with great strength or ability b: an illustrious warrior c: a man admired for his achievements and noble qualities d: one that shows great courage 2 a: the principal male character in a literary or dramatic work b: the central figure in an event, period, or movement 3: plural using heroes: SUBMARINE 2 4: an object of extreme admiration and devotion: IDOL "One peoples' hero is another peoples' villain" Background and Custer's Death: George Custer was born on December 5, 1839 in New Rumley, Ohio. ...read more.

"Let's kick their ass and get the Hell out of here" - General George Armstrong Custer Other Factors: There were many other factors that influenced Custer both as a person and his role in the army. A major influence leading to the battle of Little Bighorn was the discovery of Gold in the Black Hills of Dakota. The Government was under great pressure to allow white people to trespass over the Indian Lands in search for Gold; and with elections just around the corner did not want to gain a bad public image. This led to Army Corruption and the desertion of army troopers who, instead of protecting the lands, did just the opposite and went to search for quick fortunes. The bringing of the Railroad put great anxiety on Army Troopers from Indian attack. Trees were being cut down and wildlife was quick to dissipate. At this stage people would have liked nothing better than to crush the Indians once and for all. Note: Most of the information above has been taken from an American Film directed by Robert Siadmark and written by Bernard Gordan. Both are white Americans and so bias may be present (we must remember that the film is aimed at a largely white audience and so it must have been edited accordingly. ...read more.

However, we must take under account the fact that the Battle of Little Bighorn in some ways hastened the end of the Indians, although I still do not think that this is a positive achievement, especially one worth the title "hero". d: one that shows great courage Custer did indeed show great courage, even though this was led by his hunger for glory and his unshakeable belief in himself. 2 a: the principal male character in a literary or dramatic work This was no fictionalised story. b: the central figure in an event, period, or movement This is definitely true. He was the central figure during this particular period of time, and it was his command that led to the attacking of the Indian Camp. 3: an object of extreme admiration and devotion: IDOL Whether Custer is an object of extreme admiration and devotion, an idol, is solely down to opinion. On one hand we have the fact that he bravely fought for his Country, knowing full well that he would get himself killed in the process, and on the other hand we have the fact that even though he knew the consequences of his actions, he still rode into battle foolishly. His actions led to the deaths of over 225 people, which could have been easily avoided. ...read more.