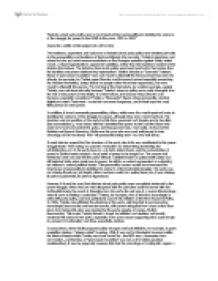 &quot;Debates about party policy were more important than personalities in deciding the outcome of the struggle for power in the USSR in the years 1924 to 1929.&quot; Assess the validity of this judgement

"Debates about party policy were more important than personalities in deciding the outcome of the struggle for power in the USSR in the years 1924 to 1929." Assess the validity of this judgement. [20 marks] The incidence, expression and outcomes of debates about party policy were decided primarily by the personalities and decisions of their participants (for example, Trotsky's reluctance and refusal to take up Lenin's recommendations on the Georgian question against Stalin, which meant a missed opportunity to oppose him publicly), rather than the functional content of the debates themselves. The debates about party policy were less important in themselves than the loyalties and power relations they represented - Stalin's attacks on "Comrade Trotsky's theory of permanent revolution" were not meant to discredit the theory (much less were the attacks, for example, by Trotsky upon Zinoviev and Kamenev's record especially concerning the October Revolution, being attacks on people rather than their arguments), but were meant to discredit the person. ...read more.

There being no concrete mechanism for determining leadership, the administrative arm of the party became a de facto determinant, and the concentration of power in Stalin's hands created a focal point of power to be fought for. The vacuum left behind by Lenin not only left the party without a definite leader on policy (while policy was still debated hotly when Lenin was in power, he still to an extent represented an authority), but without a natural political leader. This personality vacuum would have increased the importance of personality in deciding the outcome of the leadership struggle - the party was not missing its primary strategist; other members could form policy ideas, etc; it was missing its primary polemicist, its primary figurehead. However, it is not the case that debates about party policy were completely irrelevant to the power struggle. Given that one who disagreed with the party line could be tarred with the factionalist brush, the event of diverging from the party line put one at a severe disadvantage when it came to finding a contender. ...read more.

So debates about party policy were important not in the sense that certain figures had better policy ideas than others and thus were more successful in the party, but in the sense that debates about party policy led to party splits and dynamics which worked more in the favour of centrists who espoused (and later, especially when it came to the defeat of the Right, e.g. Bukharin, defined) the party line, that is - Stalin; and less in the favour of outspoken and heterodox figures like Trotsky. Overall, the judgement has some validity - debates about party policy were of importance in deciding the outcome of the power struggle between 1924 and 1929. However, it may not be the case that they were more important, appearing as they do to be subsumed under a larger landscape in which structures of power and dynamics of personality had more sway in deciding even the outcome of those policy debates, as well as the power struggle itself. ...read more.