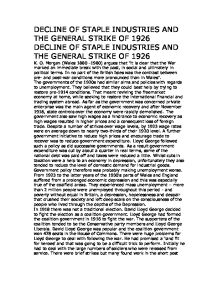 K. O. Morgan (Wales 1880 -1980) argues that "it is clear that the War marked an immediate break with the past, in social and ultimately in political terms. In no part of the British Isles was the contrast between pre- and post-war conditions more pronounced than in Wales".

The governments of the 1920s had similar aims and policies with regards to unemployment. They believed that they could best help by trying to restore pre-1914 conditions. That meant reviving the freemarket economy at home, while seeking to restore the international financial and trading system abroad. As far as the government was concerned private enterprise was the main agent of economic recovery and after November 1918, state controls over the economy were rapidly demolished. The government also saw high wages as a hindrance to economic recovery as high wages resulted in higher prices and a consequent loss of foreign trade. Despite a number of strikes over wage levels, by 1923 wage rates were on average down to nearly two-thirds of their 1920 level. A further government initiative to reduce high prices and encourage trade to recover was to reduce government expenditure. Lloyd George followed such a policy as did successive governments. As a result government expenditure was cut by about a quarter in real terms, some of the national debt was paid off and taxes were reduced a little. Whilst cuts in taxation were a help to an economy in depression, unfortunately they also tended to reduce the level of domestic demand for industrial goods. Government policy therefore was probably making unemployment worse.

From 1923 to the latter years of the 1930's parts of Wales and England suffered from a prolonged economic depression and this was especially true of the coalfield areas. They experienced mass unemployment – more than 2 million people were unemployed throughout this period - and poverty without equal in Britain, a depression, hopelessness and despair that crushed their society and left deep scars on the consciousness of the people who lived through the depths of the Depression.

In 1918 there was not a traditional election. David Lloyd George decided to fight the election as a coalition government. Lloyd George had formed the coalition government in 1916 to fight the war. The supporters of the coalition tended to be the Conservative party members and Lloyd George Liberals. David Lloyd George was popular and the coalition government won 478 seats in the House of Commons. There were huge problems for Lloyd George to deal with following the war. He had promised a ‘land fit for heroes’ and that was going to be a difficult trick to perform. Initially he had to deal with the large numbers of soldiers who were released from service. There were brief strikes but many found work in the short post war boom. In 1918, there was a sudden period of inflation. Prices and profits increased but wages lagged behind. Trade Unions became increasingly powerful and were determined to protect workers from the wage stagnation. In 1919 and 1920 there were 2000 strikes throughout Britain. The strikes were not just about wages however. The workers were bitter about their lives in the trenches and still after all their efforts the capitalists were still making vast profits- mainly from war production. The Russian Revolution had publicised government control and nationalisation, leaving the British government panicking that the strikes could turn into something far more serious. One of the most serious strikes took place in Glasgow. The Clydesdale engineers and shipbuilders demanded a 40 hour week and hoisted a red flag in George Sq, Glasgow. On the back of this the miners threatened a strike if they did not have a six hour day, thirty percent pay increase and nationalization of the mines. Lloyd George compromised and gave the miners a seven hour day, continued government control for the foreseeable future and initiated a Royal Commission. The Sankey Commission investigated the problems in the coal industry.

By the end of 1921 approximately two million people were unemployed. The slump was a result of a lack of investment in some industries and a lack of demand in more traditional industries such as shipbuilding and coal etc. In 1920 Lloyd George passed the Unemployment Insurance Act. This built on the 1911 Act and covered all workers earning less than two hundred and fifty pounds excluding agricultural labourers, domestic servants and self employed people. The contributions increased but so did the allowances. Allowances increased from five shillings to seven shillings a week. Unfortunately, as unemployment increased the system could not cope as outgoings far exceeded incomings. The government could not abandon the system only one year after implementation so they extended benefit for a slightly longer period and many believe this prevented revolution in Britain.

The Sankey Commission could not come to a suitable conclusion regarding the problems in the coal industry. The government decided not to continue nationalisation, leaving the coal pits in private hands as from April 1st 1921. As exports had declined wages would have to be dropped. This was announced to the miners who threatened a National Strike. The three largest unions had joined together- the railwaymen, transport workers and miners, creating a Triple Alliance. This fell apart in 1921 as the railway workers and transport workers did not support the General Strike. The miners carried on regardless but failed after three months. Lloyd George had averted a strike on a national scale but was fast losing popularity. The government lost significant sums of revenue and had to cut back on issues such as education, the army and navy, health services and council house building. It was known as Geddes Axe as Sir Eric Geddes recommended these drastic cuts in expenditure and the government reduced spending by sixty four million pounds.

The General Strike had its origins in the coal industry, which was a need of modernisation and investment. The miners themselves believed that the only way in which efficiency and modernisation could be achieved was through nationalisation. Originally the mines were under government control during the war and then under David Lloyd George and the coalition government. In the 1920’s the condition worsened as the Ruhr in Germany was producing significant quantities of coal and therefore the worldwide price dropped. The return to the Gold Standard under Winston Churchill as Chancellor meant that British exports were over priced and of course coal was one of the largest exports out of Britain.

The coal owners proposed a wage cut but this was rejected by the workers. The government averted a strike initially by offering two things. Firstly, by offering subsidies and secondly, by appointing the Samuel Commission.

The TUC was ready to support the miners as usually all wages followed the trends of the miners. However, the TUC and miners thought the Samuel Commission would solve any problems and bring the situation to an end. The Samuel Commission report was published in March 1926. The document was fairly conservative and proposed that the mine owners should continue with reorganization and modernization, should not as k for longer hours but the document also suggested that the miners should not ask for higher wages and the government should not continue giving subsidies-at least until the crisis was over. Neither mine owners nor workers accepted the report, but the TUC continued to negotiate on behalf of the miners. The mine owners announced there would be a pay cut on 30th April. In retaliation the miners threatened a strike on May 1st. The coal owners locked the doors on 30th April in an attempt to stop a strike. The TUC still attempted negotiations with the Conservative government, but this proved useless and no solution was reached.

There were approximately one and a half million workers on strike during this time and the TUC made it clear they did not wish to inconvenience the public or bring down the government. What they did want was protection for coal workers wages. The TUC still negotiated with the government with Samuel acting as mediator. The government showed no signs of softening and the TUC called off the General Strike on May 12th. Samuel had made a number of proposals, which they hoped would be accepted. Unfortunately, the miners rejected the proposals and the miners continued to strike, whilst believing the TUC had betrayed them.

The coal strike continued until December and eventually the coal workers had to return to work with longer hours and less pay.

The consequences of the General Strike were mainly negative. The majority of trade union members became disillusioned with the TUC and membership numbers dropped. Approximately 1.1 million members had left the TUC by 1933. The coal industry continued to decline with no investment or modernization in evidence. Even more problematic was the decline in exports. The coal industry was suffering a slow and painful death. In 1927 the government passed the Trade Disputes Act which made another General Strike impossible. Union funds could be seized and no other industry could go on a sympathy strike. More positive results of the strike gave the Labour Party more support and in some industries the strike acted as a wake up call. Some employers such as the Imperial Chemical Industries started to improve labour relations.