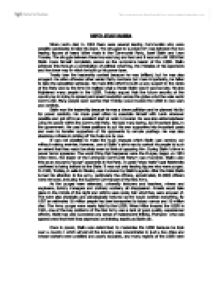 DEPTH STUDY RUSSIA When Lenin died in 1924 there were several leading Communists who were possible candidates to take his place. The struggke to succede him was between the two leading figures of teand bitter rivals in the Communist Party, Josef Stalin and Leon Trovsky. The struggle between these two was long and hard and it was not until 1929 that Stalin made himself completely secure as the sumpreme leader of the USSR. Stalin achieved this through a combination of political scheming, the mistakes of his opponents and the clever way in which he bulit up his power base. Trosky lose the leadership contest because he was brilliant, but he was also arrogant. He often offended other senior Party members but more importantly, he failed to take the opposition seriously. He made little effort to built up any support in the ranks of the Party and by the time he realised what a threat Stalin was it was too late. He also frightened many people in the USSR. Trotsky argued that the future security of the country lay in trying to spread permanent revolution across the globe untul the wole world Communist. ...read more.

Stalin used this as an excuse to "purge" opponents in the Party. In great "show trails" loyal Bolsheviks conffesed to being traitors to the State. It was not only leading figures who were purged. In 1940, Trotsky, in exile in Mexico, was murdered by Stalin's agents. After the trials Stalin turned his attention to the army, particularly the officers, aproximately 25.0000 officers were removed, including the Supreme Commander of the Red Army. As the purges were extended, university lecturers and teachers, miners and engineers, factory managers and ordinary workers, all disappeared. Arrests would take place in the middle of the night and victims were rarely told what they were accused of. The were also physically and psicologically tortured so the would confese everything. By 1937 an estimated 18 million people had bee transported to labour camps and 10 million died. The Army purges were nearly fatal to the USSR. When Hitler invaded the USSR in 1941, one of the key problems of the Red Army was a lack of good quality, experienced officers. Stalin had also succedeed any sense of independent thiking. Everyone who was spared knew that their lives depended on thinking exactly as Stalin did. ...read more.

The first Five-Year Plan revealed a shortage of workers, so from 1913 the government concentrated on drafting more women into industry. It set up thousands of new creches and day care centers so that mothers could work. By the late 1930's, may Soviet workers had improved their conditions by aquiring well-paid skilled jobs and earning bonusses for meeting targets. Unemployment was almost non-existent. Education became free and Stalin invested huge sums in training schemes based in colleges and in the work place. But life was very harsh under Stalin. Factory discipline was strict and punishments were hard. Lateness or absences were punished by sacking that often meant losing your flat or house as well. To scape the hard work and discipline some workers tried to move to other jobs, so the secret police introduced internal passports which prevented free movement of workers inside the USSR. On the great enginereenig projects many of the workers were prissioners who had been sentenced to hard labour for being political opponents, or suspected opponents, of Stalin, for being Kulaks (rich peasants) or Jews. Many other prissoners were simply unfortunate workers who had had accidents or made mistakes in their work but had been found guilty of "sabotage". ...read more.