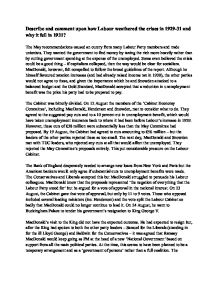 Describe and comment upon how Labour weathered the crises in 1929-31 and why it fell in 1931? The May recommendations caused an outcry from many Labour Party members and trade unionists. They wanted the government to find money by taxing the rich more heavily rather than by cutting government spending at the expense of the unemployed. Some even believed the crisis could be a good thing - if capitalism collapsed, then the way would be clear for socialism. MacDonald, however, felt compelled to follow the broad guidelines of the report. Although he himself favoured taxation increases (and had already raised income tax in 1930), the other parties would not agree to these, and given the importance which he and Snowden attacked to a balanced budget and the Gold Standard, MacDonald accepted that a reduction in unemployment benefit was the price his party had to be prepared to pay. The Cabinet was bitterly divided. On 12 August the members of the 'Cabinet Economy Committee', including MacDonald, Henderson and Snowden, met to consider what to do. They agreed to the suggested pay cuts and to a 10 percent cut in unemployment benefit, which would have taken unemployment insurance back to where it had been before Labour's increase in 1929. However, these cuts of �38 million were substantially less than the May Committee had proposed. ...read more.

He had the support of around a dozen Labour backbenchers but he found himself rejected by the rest. A few weeks later, Macdonald was formally expelled from membership of the party. Although Snowden, who became Chancellor, was able to gain parliamentary approval for the proposed spending cuts - with Conservative support - and the loans which the bank had so desperately wanted were received in September, for all the political upheaval Britain's currency was not saved. On 21 September, the Gold Standard was abandoned. After all this trauma, MacDonald felt the need to call a general election to restore confidence and appeal to the electorate for a 'Doctor's Mandate' for the National Government's programme. The 1931 lection was disastrous for Labour as a party. From 288 seats in 1929, the Labour Party was reduced to only 52 seats. Among those who lost their seats were many senior figures including Henderson himself. This crushing defeat provoked further anger towards MacDonald and those who had followed him into the National Government. MacDonald himself became the 'prisoner' of the Conservatives while the leadership of the Labour movement passed out of the hands of the parliamentary party, now led by Lansbury, and into the hands of the trade unions, where Bevin was an important influence. ...read more.

The Socialist League eventually dissolved itself in 1937. Sir Stafford Cripps was expelled from the party in 1939 after he tried to organise a broad alliance - including socialists, communists and disgruntled Conservatives and Liberals - in opposition to Chamberlain's appeasement policies. Mainstream Labour opinion refused to tolerate any deal which involved communists and did all it could to avoid the taint of 'radicalism'. The party used the years in opposition to clarify its ideas and to develop a coherent policy programme. The Labour leadership accepted Keynes' ideas about the need for government to manage the economy. In 1937, 'Labour's Immediate Programme' set out a plan for the nationalisation of British industries. However, despite this improvement, Labour remained out of government in the 1930s and the Conservative-dominated National Government continued to have a large overall majority. Labour's support strengthened in London and in areas in the north of England and Scotland where there had been only limited recovery from the Depression. It did less well in the more prosperous areas and amongst the middle class. Recovery was therefore limited and largely consisted of winning back lost seats and votes rather than power. By 1940, Labour was ready for government, but it had to wait for the experience of war to affect the electorate sufficiently to persuade it that a Labour government was worth electing. ?? ?? ?? ?? ...read more.