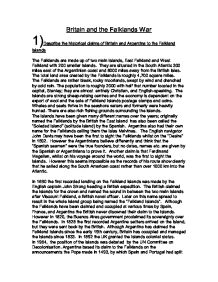 Britain and the Falklands War 1)Describe the historical claims of Britain and Argentina to the Falkland Islands The Falklands are made up of two main islands, East Falkland and West Falkland with 200 smaller islands. They are situated in the South Atlantic 300 miles east of the Argentinian coast and 8000 miles away from the British Isles. The total land area created by the Falklands is roughly 4,700 square miles. The Falklands are rather bleak, rocky moorlands, swept by wind and drenched by cold rain. The population is roughly 2000 with half that number located in the capital, Stanley; they are almost entirely Christian, and English-speaking. The islands are strong sheep-raising centres and the economy is dependent on the export of wool and the sale of Falkland Islands postage stamps and coins. Whales and seals thrive in the seashore waters and formerly were heavily hunted. There are also rich fishing grounds surrounding the islands. The islands have been given many different names over the years; originally named the Falklands by the British the East island has also been called the "Soledad island" (solitude island) by the Spanish. Argentina also had their own name for the Falklands calling them the Islas Malvinas. The English navigator John Davis may have been the first to sight the Falklands whilst on the "Desire" in 1592. However the Argentinians believe differently and think that the "Spanish seamen" were the true founders, but no dates, names etc. ...read more.

agreed. So it was clear that to Britain the Falkland Islands were just a distant place that they had a distant relationship with and no need for. However in March 1982 when a group of Argentinian scrap metal workers arrived on South Georgia (a dependency of Britain) and the Argentinian flag was raised the British government suddenly changed their views. Britain swiftly became very involved and sent the HMS Endurance, an ice breaker with Wasp helicopters and 22 Royal Marines, from Port Stanley to South Georgia. So all of a sudden when before Britain was almost set on giving away the islands, they were now sending out protection and defence against the Argentinians. One of Mrs Thatcher's reasons for counter-attacking was that she did not want to look useless in front of her country. She did not want it to seem as if she would not try to protect her country when it was in trouble. Another reason was she did not want one of her own countries to be taken away by a poorly run country, it was also "the duty of Her Majesty's Government to do everything that we can" as she said in a speech to the House of Commons on 3rd of April 1982. Previous to the Argentinian attack the House of Commons strongly believed in keeping the islands. Mrs Thatcher did not want to seem the "bad guy" and ruin her chances of being re-elected so she decided to go with her MPs and fight for the Falklands. ...read more.

It also seems that neither side was realistic enough, however for the British it still didn't matter. From a journalist's interview with Royal Marine Captain Peter Babbington MC, recorded in 1985, apparently he and the others were expecting three of them to every one Argentine in the Mount Harriet attack. But instead it was completely the opposite and although this must have come as a great shock he says that "morale wasn't a problem", and they just continued. On the other hand, the Argentines misjudged the British from the start thinking in the beginning that they (Britain) "would never really send such a force to capture the Malvinas" (This quote is taken from an interview on 15th June 1982 with an Argentinian POW and thought by the majority of Argentina). When all the defensive mountains around Stanley were recaptured by the British the war was effectively over. Even though Menedez's army outnumbered the British he did not wish for a street battle in Stanley and instead chose to surrender. I believe that the British superiority of technology and leadership overruled and led to victory. Perhaps if the Argentine bombs had gone off or the troops had pushed on and not surrendered, than the Falklands would not now be British. Nevertheless the real answer is that the Falklands war was not won because the Argentines fought badly although this obviously did help, but because the British had the higher morale and knew that they would be triumphant when it came to the fight. ...read more.