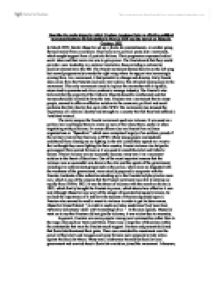 Describe the main stages by which Fascism developed into an effective political movement between its foundation in March 1919 and the march on Rome in October 1922 In March 1919, Benito Mussolini set up a fascio de combattimento, or combat group, formed mainly from ex-soldiers. They were not a political party, but a movement, which sought support from all patriotic Italians. Their programme expressed radical social ideas and their main aim was to gain power. The Fascists said that they would provide a new leadership in a national revolution, thus providing a nationalist, socialist alternative to the PSI. The Fascist movement started heavily on the left wing but moved progressively towards the right wing where its support was increasingly coming from. As a movement, it had potential to change and develop. Early Fascist ideas came from the Futurists and were very radical, this attracted many people to the movement. This early movement aimed to replace the monarchy with a republic, return land to peasants and allow workers to manage industry. The Fascist's also believed that the property of the Catholic Church should be confiscated and that women should be allowed to have the vote. ...read more.

Fascism also seemed to need to resort to violence in order to get its ideas across, Mussolini himself stated:" in order to make our ideas understood [we] must beat refractory {obstinate} skulls with resounding blows." In the sane speech, Mussolini went on to say that Fascism did not glorify violence; it was violent due to necessity. In general, Fascism was more popular among rural communities rather than in the large cities such as Turin and Milan. There was a large fear of Socialism within the countryside that won the Fascists much support. Farmers and peasants believed that Socialists threatened their gains. There was considerable resentment over the power of Socialist Land Leagues and many farmers were prepared to take action against the Socialist threat. Many small landowners harmed by Socialist local government and worried about a Socialist revolution joined the movement. Labourers, tenants, farm managers and some better-off peasants were recruited to the squadristi and enabled the Fascist's to challenge the Socialist hold over the countryside. Many landowners and large farmers supported the Fascist movement due to its violent opposition towards the Socialists. By 1921 the Fascist leader Mussolini had changed the movement's policies in order to gain more support. ...read more.

Surprisingly, the Socialists did little to stop the Fascists from entering parliament. The Socialists won support from those living in fear of a Fascist takeover. The Fascists however posed as the saviours of the country by crushing Socialist strikes on many occasions. By the summer of 1922, the Liberal government realised that they had two choices; either take military action against the Fascists, or negotiate a deal with Mussolini. It had taken 3 years for any Italian government to address the internal problems Italy was facing. Throughout this period, Mussolini negotiated with the government and parliamentary leaders. He asked for four government posts in which to put a handful of his parliamentary followers in. Mussolini created the impression that he would be quite happy to follow normal political processes. However, he then demanded he be made Prime Minister. The decisive moment of Fascism becoming an effective political movement can be seen by the march on Rome in October 1922. The Fascist movement was geared to seize control of towns and entire provinces. Italian King Victor Emmanuel II's decision to compromise with Mussolini and the Fascists led to Mussolini being appointed as Prime Minister, Foreign and Interior minister. The party had finalised its development from a gathering of a hundred or so people in 1919 to gaining governmental control of Italy. ...read more.