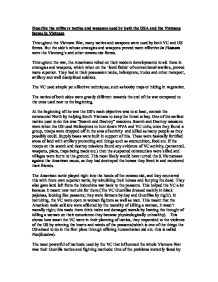 Describe the military tactics and weapons used by both the USA and the Vietcong forces in Vietnam Throughout the Vietnam War, many tactics and weapons were used by both VC and US forces. But the side's whose strategies and weapons proved more effective in Vietnam were the Vietcong's and other communist forces. Throughout the war, the Americans relied on their modern developments to aid them in strategies and weapons, which when on the 'level fields' of conventional warfare, proved more superior. They had in their possession tanks, helicopters, trucks and other transport, artillery and well disciplined soldiers. The VC used simple yet effective techniques, such as booby traps or hiding in vegetation. The tactics of both sides were greatly different towards the end of the war compared to the ones used near to the beginning. At the beginning of the war the US's main objective was to at least, contain the communist North by helping South Vietnam to keep the threat at bay. One of the earliest tactics used to do this was "Search and Destroy" missions. Search and Destroy missions were when the US used Helicopters to hunt down NVA and VC units, once they found a group, troops were dropped off in the area of activity and killed as many people as they possibly could. Supply bases were built in support of this. These were basically fortified areas of land with artillery protecting and things such as ammunition, food etc. If the troops on the search and destroy missions found any evidence of VC activity, (personnel, weapons, plans, traps being made etc.) then the suspected communists were killed and villages were burnt to the ground. This most likely would have turned the S.Vietnamese against the American cause, as they had destroyed the homes they lived in and murdered their friends. The American tactic played right into the hands of the communist, and they countered this with there own superior tactic, by rebuilding their homes and burying the dead. ...read more.

Tanks could not be used because of the geography of Vietnam, so trucks were used, but these were easy targets aswell as being literally a car. Instead of trucks, the Americans used Armoured Personnel Carriers. These were basically open-style tanks. They were used more than the Tank and were mainly for transpot. They could be used on land and water, which gave them a bit more protection from the VC attacks; and the armour itself gave ample protection to the crew if under attck from small arms fire. As for the VC, where were they getting all these supplies from to destroy American tactics? The answer was simple. The Ho Chi Minh Trail. It was a 1000 mile "secret" supply trail from North Vietnam to South Vietnam. It was so big that at any given time, 10,000 trucks could be on it transporting suppplies. Also, it wasn't just one straight road, it had a 30 mile width, and in it were hundreds of paths that branched off. That way, if the part of the trail was bombed for example, them the VC could simply turn around and follow a different route. The US knew about this (but they didn't know the fact that it had many branched off sections- they thought it was one straight route) and this made them want to stop it. Reconnaisance photos showed little or no evidence of the trail, it was literally built under the American's noses; but they just couldn't find it. The American Intelligence analysts could hardly spot the trail from above because the dense jungle had different canopy levels. The VC cut the lower levels so their transport could meander through, leaving the top layer of canopy as cover from the US planes and other enemies. But Aeroplanes weren't only used for taking photos. As the Americans could only give a rough estimate of the position of the trail, there was still a chance of finding it, and they began use planes to bomb the Ho ...read more.

Furthermore, the VC weren't fighting as Gerillas, they had a change in their tactics and were fighting using conventional warfare. This is proved by the fact that more than 500 Americans were either wounded or died in the first three weeks of the major attack-much quicker death rates than ambushing. This changed the view of the war to the public of America, as they realised that the US wasn't actually winning the war, their loved ones were dying. Thus bringing down morale in America itself, as the attack led to the media saying that the VC were growing in strength. But even though the VC had the upper hand at first, they were fighting conventionally, the way the American troops were specially traned to do, and the end of the Tet Offensive was seen a US victory as it forced North Vietnam to begin peace talks (only a few places were captured by the communists, the other posts were successfully defended). Tet was still a successful counter-tactic by the VC as many US soldiers lost their lives. So two months later, the last tactic came in effect from the "revenge seeking" Amerians. In March later that year, a search and destroy mission to a village known as a VC stronghold resulted in the My Lai Massacre. US forces made their way to the village and there was no resistence, between 175 and 500 unarmed civilians were killed and no VC were actually found. They had escaped. The innocent villagers were brutally shot and the bodies of the women and children were photographed by a US army photographer. The deed was commited during the same year: 1968, but was made public in November 1969. In the American soldiers' defence, they were just obeying orders; but that wasn't justified. Overall, these events show evidence that the VC's tactics and weapons were much better in helping them change the tide of the war. Their simple yet ingenious "home-based" techniques evidently proved to be far more effective than the modern American's, thus resulting in a regretfull intervention and humiliating defeat. ...read more.