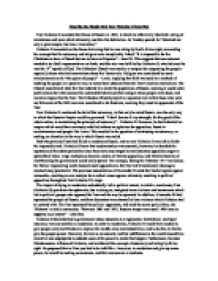 Describe the Russia that Tsar Nicholas II inherited Tsar Nicholas II ascended the throne of Russia in 1894, in which he effectively inherited a string of revolutions and wars which ultimately cost him his abdication. As Trotsky quoted, he "inherited not only a giant empire, but also a revolution." Nicholas II ascended on the throne believing that he was ruling by God's divine right, succeeding the concept that the autocracy and religion were inexplicably linked. "It is impossible for the Christians to have a Church but not to have an Emperor" - Ivan III. This suggests that one autocrat needed to be God's representative on Earth, and this role was fulfilled by Nicholas II, who believed he was the 14th apostle of God. The Orthodox Church was used as a weapon for conquering the people - especially those who had reservations about the Tsarist rule. Religion was considered by some revolutionaries to be "the opium of people" - Lenin, implying that faith was used as a method of sedating the people in a passive way, to make them obsolete from the Tsar's motives and actions. The Church would teach what the Tsar ordered it to teach the population of Russia, meaning it could make justifications for what seemed like outlandish behaviour (for example when people were shot), and maintain respect for the Tsar. The Orthodox Church played an important role in that those who were not followers of the faith were not considered to be Russians, meaning they must be opponents of the Tsar. ...read more.

and to do as he said. The structure of the government also made it difficult to modernise since those who would lead the urbanisation (the peasants), had no say since there was a lack of parliament. Those at the top of the social structure were incompetent and there as a result of nepotism. Resentment for Tsar Nicholas II stemmed from the winners and losers in this capitalist system of industrialising. Nicholas II inherited this hatred, which threatened Russia's culture and tradition of autocracy. Nicholas II bequeathed a Russia whose social structure of society was bottom heavy - in that there were too many people with too little. 90% of Russia's society was peasants, and 1% was nobility, meaning 1.8 million people in the upper classes of the social hierarchy owned 25% of all land - something the peasants were hungry for. Despite the emancipation of the serfs in 1861, the peasants were still restricted under Tsarist rule, which affected the way they farmed and their personal freedoms. Nicholas II inherited a society in which the peasants wanted to be able to think for themselves and have freedoms, not a Tsar telling you what to do. This led to resentment and many peasants wanted to overthrow the Tsar. Nicholas II continued the way in which the previous Tsars disliked the emergence of an educated middle class (as a result of urbanisation). This is because they were exposed to radical ideas which undermined the autocracy. The Tsar also succeeded a Russia which had to tax the peasants in order to gain further money to modernise. ...read more.

described his role as "My poor nicky's cross is heavy", which suggests there was lots of pressure to fit the standard that his father had left behind. Orlando Figes generalised Tsar Nicholas II's role as "autocracy without an autocrat", implying that Nicholas was not cut out to be a Tsar, the ruler of Russia, and to continue autocracy. The ascendancy of Tsar Nicholas II to the Russian throne is part of what I believe to be the structuralism of history - its chosen path and destiny. The downfall of the previous Tsars was always going to happen, and a new Tsar was always going to need to succeed. Tsar Nicholas II was always going to be next in heir to the throne; however he wasn't cut out to be a Tsar. I think there always was going to be a point when modernisation became essential - no matter who achieved it. Tsar Nicholas II was tolerated because although incompetent, it didn't change the mission of the Orthodox Church - to spread Orthodox faith in the limitless Russian Empire. In conclusion, many different inter-related aspects, ranging from political to cultural, played a part in the Russia that Tsar Nicholas II inherited, essentially contributing to his downfall and abdication in 1917. I believe the most salient feature is that of the autocracy, and therefore the political aspect of Russia, which was as the biggest hindrance which Nicholas II inherited. The autocracy was a fundamental obstacle in trying to modernise Russia - the overall aim of the Tsar - and to overcome the economic backwardness of the country. ...read more.