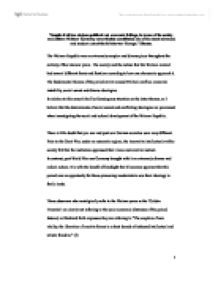 Despite it all too obvious political and economic failings, in terms of its society and culture Weimar Germany nevertheless constituted one of the most advanced and modern countries in interwar Europe.' Discuss.

'Despite it all too obvious political and economic failings, in terms of its society and culture Weimar Germany nevertheless constituted one of the most advanced and modern countries in interwar Europe.' Discuss. The Weimar Republic was an extremely complex and diverse place throughout the entirety of the interwar years. The society and the culture that the Weimar created had several different facets and frontiers according to how one chooses to approach it. The fundamental themes of the period evolve around Political conflict, economic instability, social unrest and diverse ideologies. In relation to this essay I shall be focusing my attention on the latter themes, as I believe that the determinants of social unrest and conflicting ideologies are paramount when investigating the social and cultural development of the Weimar Republic. There is little doubt that pre-war and post-war German societies were very different. Prior to the Great War, under an autocratic regime, the innovative intellectuals within society felt that the institution oppressed their views and creative instinct. In contrast, post World War one Germany brought with it an extremely diverse and radical culture. It is with the benefit of hindsight that it becomes apparent that this period was an opportunity for those pioneering modernists to sow their ideology in fertile lands. Those observers who nostalgically refer to the Weimar years as the 'Golden Twenties' are clearly not referring to the socio-economic distresses of the period. ...read more.

Expressionist plays by Ernst Toller and George Kaiser to name just a couple became a national institution. Kolb declares that they were followed with an "Intensity that can scarcely be imagined today."(7) The outside world watched Germany develop into a world theatrical metropolis. It had the most influential producers, the most renowned actors and the most knowledgeable audiences. During the early Weimar years the most prestigious theatrical productions were conveyed in Germany, and Germany alone. One of the major reasons for the overwhelming support of the arts in Weimar Republic was the fact that they had always been decentralised since her unification. Due to this historical dimension, the cultural modernisation of the Weimar Republic was not confined to Berlin. Its origins spread throughout the nation, even to the smaller provinces. The experience of the Great War and the unsettled years that followed was not unique to Germany. All over Europe an entire generation of creative and receptive people had been deeply affected by the travesty. In the immediate post-war years Hungary and Russia followed a similar cultural and development path to Weimar Germany. The hopes of some of the artistic forms of the revolutionary movement seemed "almost as high-flown during the first months of the Weimar as in Russia or Soviet Hungary around the same time."(8) Further weight can be added to this claim with the above countries sharing similar cultural manifestations. ...read more.

It became ironic that the very factors that contributed to the advancement of German culture also ultimately led to the downfall of the regime. While the revolutionary attitude of the period combined with political instability created the perfect ambience and setting for cultural diversity to prosper. It only heaped further socio-economic pressures on an already fading Weimar government. Henry Pachter said in an autobiographical fragment, "It is a matter of historical injustice to say that, for all its shortcoming, the Weimar Republic was one of the freest states that ever existed, that it afforded the working classes greater opportunities for collective improvement than any other European state at the time." (14) The legacy of the republic will live on for many generations. It says much for the Weimar culture and its search for fresh horizons that from nineteen forty-five to the present day the majority of new artistic ideas and forms have deep routed origins in the nineteen twenties period. To conclude, by means of the evidence I have brought to light in my essay it would be extremely na�ve of any observer to discredit the cultural impact that the Weimar years had on European ideology. Laqueur is of the opinion that "As one of the main cradles of cultural modernism its place in history is certain." (15) There is little doubt in my mind that despite its all too obvious political and economic failings, in terms of society and culture the people of the Weimar Republic had the privilege to be apart of one of the most advanced and modern countries in Europe. ...read more.