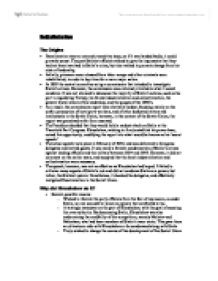 DeStalinization The Origins * Desalinization was an extremely sensitive issue, as if it was handed badly, it could provoke unrest. The post Stalinist officials wished to give the impression that they had not been involved in Stalin's crime, but also wished to promote change from his style of leadership. * Initially, prisoners were released from labor camps and other criminals were rehabilitated, in order to buy time for a more major action. * In 1995 the central committee set up a commission that intended to investigate Stalin's crimes. However, the commission was extremely limited in what it could condemn. It was not allowed to denounce the majority of Stalin's actions, such as his part in liquidating Trotsky, his forced industrialization and collectivization, the general brutal nature of his leadership, and the purges of the 1930's. * As a result, the commissions report was relatively modest, focusing mainly on the unfair persecution of loyal party workers, and of other dedicated ...read more.

Nonetheless, it shocked the delegates, and effectively instigated Desalinization in the Soviet Union. Why did Khrushchev do it? * Several possible reasons: - Wished to liberate the party officials from the fear of repression, as under Stalin, no one was safe to voice an opinion that conflicted to his. - A strategic maneuver on the part of Khrushchev, with the goal of securing his own authority. By denouncing Stalin, Khrushchev was also undermining the credibility of his competitors, namely Molotov and Malenkov, who had been members of Stalin's inner circle. This gave them an ultimatum: side with Khrushchev or be condemned along with Stalin - Truly wished to change the coarse of the development of the Soviet Union The events that followed * Throughout the 1950's, Khrushchev's policy of Desalinization continued, with many new policies constructed that greatly deviated from the past Stalinist approach. ...read more.

* Desalinization, as a policy, constantly fluctuated in its intensity, linked closely to the current political and economic situations. * In 1961, Desalinization reached its culmination, when, at the twenty-second party congress, Khrushchev gave a considerably more direct and public condemnation of Stalin, blaming him both for the German attack of 1941 and his general inept leadership. The members of the Anti-party group were publicly identified, and, symbolically, Stalin was removed from the Lenin-Stalin mausoleum, signifying Khrushchev intent to promote only Lenin as a figurehead of communist authority. In the same year Stalingrad was renamed Volgograd. * As Khrushchev continued his 'desalinization campaign, he alienated more and more of the high level party members who did not agree with what he was doing. Eventually, this was one of the key factors that caused him to lose control of the Soviet Union in 1964. Historiography "Destalinisation was a stop-go policy, closely linked to events in other policy areas" - Martin McCauley ...read more.