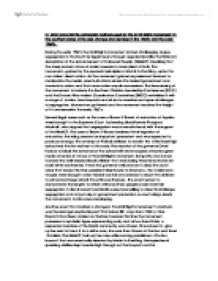 In what ways did the campaign methods used by the Civil Rights movement in the southern states of the USA change and develop in the 1950's and the early 1960's . During the early 1950's the Civil Rights movement started challenging de jure segregation in the South by legal means through organisations like the National Association of the Advancement of Coloured People (NAACP) .Realizing that the deep rooted nature of r****m needed a more direct attack. The movement, guided by the peaceful principles of Martin Luther King, opted for non-violent direct action. As the movement gained experience it learned to manipulate the media, create situations where the federal government was forced into action and that mass action equals concessions .The broadening of the movement to include the Southern Christian Leadership Conference (SCLC) and the Student Non-violent Coordination Committee (SNCC) revitalized it with a range of tactics ,from boycotts and sit-ins to marches and open challenges to segregation. Momentum gathered and the movement reached the height of it's watermark in the early 1960's. Several legal cases such as the case of Brown V Board of education of Topeka were brought to the Supreme Court by leading black lawyer Thurgood Marshall , who argued that segregation was unconstitutional, with the support of the NAACP. The case of Brown V Board declared the integration of education; this ruling created an important precedent and was expected to produce change. ...read more.

Furthermore a new head figure had emerged along with a new organisation, the SCLC. Thus King began to develop methods in the direction of more confrontational non-violent protest. This new phase of peaceful protest was further developed in North Carolina with the Greensboro sit-ins. Four college students ordered food from the 'whites only' counter at a branch of Woolworth's. This just like the Montgomery bus boycott had not been the first of its kind, there had been several sit-ins before. However the fact that the Woolworth staff didn't know how to react meant the protest could gather momentum soon the four students were joined by other including 3 white students. The protest gained nation wide support as sit-ins spread to as many as 100 other cities and involved 50 000 people. The image of idealistic, well dressed and peaceful students brought symbolism to the protest and through the media coverage showed the rest of America the barbaric nature of the white aggressive r****t that were mistreating them. This gained massive publicity and sympathy even the support of the governor of North Carolina was gained. Woolworth have in and desegregation of public places was achieved as a result of wide spread sit ins. With the support of King the sit-in set precedent for the non-violent direct action philosophy of King. The event showed how the moral high ground could be kept without the use of violence and became a symbol. ...read more.

Phillip Randolph in 1941 and was again suggested and organised. The timing was perfect .The year 1963 a 100 years after the Emancipation Proclamation by Abraham Lincoln and still blacks were not 'free'. It carried further symbolism in the presence of the Memorial of Abraham Lincoln that validated their argument. Several civil rights groups would be present along with various white supporters including religious groups, altogether whites made up one third of the quarter of a million people present. King delivered his memorable "I have a dream" speech. Authorisation was granted from the Kennedy administration once assurances had been given of the moderate and peaceful nature of the march which sent across a positive image of a well organised and unified Civil Rights movement. This served as leverage for Kennedy to push for the civil rights bill into action. The march proved an effective change of tactics one completely peaceful and with the backing of the government, it also taught the movement the importance of a massive integrated demonstration. The Civil Rights movement methods began with challenging the constitutionality of segregation in the South during the early 1950's with successful cases like Brown V Board of education. Blacks began to rely less on government protection and changed to more active non-violent methods like the Montgomery Bus boycott where the movement gained valuable experience. These tactics further developed under King's inclusive philosophy of non-violent direct action where the importance of manipulating publicity, maintaining the moral high ground and government intervention was recognised. In this way the Civil Rights movement through their experience developed and changed their tactics . ...read more.