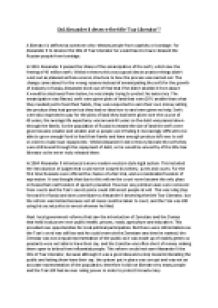 ﻿Did Alexander II deserve the title ?Tsar Liberator?? A liberator is defined as someone who releases people from captivity or bondage. For Alexander II to deserve the title of Tsar Liberator he would have to have released the Russian people from bondage. In 1861 Alexander II passed the Ukase of the emancipation of the serfs, which saw the freeing of 40 million serfs. Whilst in theory this was a good idea in practice things didn?t work out as planned as there was no structure to how the process was carried out. The change came about for the wrong reasons instead of emancipating the serfs for the growth of industry in Russia, Alexander did it out of fear that if he didn?t abolish it from above it would be destroyed from below; he was simply trying to protect his autocracy. The emancipation was flawed, serfs were given plots of land that were 20% smaller than what they needed just to feed their family, they were expected to earn their own money selling the produce they had grown but they had no idea how to and were given no help. ...read more.

It was thought that due to this reform the court room became the only place in Russia that real freedom of speech prevailed. However any political cases were removed from courts and the Tsar?s secret police could still arrest people at will. This was a big step forward for Russia and does contribute to Alexander II deserving the title Tsar Liberator, but the reform was limited because not all cases could be taken to court, and the Tsar was still using his secret police to arrest whoever he liked. Next local government reforms that saw the introduction of Zemstavs and the Dumas that held local power over public health, prisons, roads, agriculture and education. This provided new opportunities for local political participation. But there were still imitations as the Tsar?s word was still law and he could overrule the Zemstavs any time he wanted, the Zemstav was not a equal representation of the public as it was made up of mainly gentry so peasants were not able to have their say, and the Zemstav was often short of money making them open to bribes from influential people. ...read more.

Censorship was relaxed and education policies became more liberal, meaning that university students were now able to learn about life outside of Russia and leave Russia in order to study. This liberated Russian scholars as they were able to learn about other places and about their governments and philosophy, but it caused an increase in student radicalism, and political instability. This in some cases lead to riots. This was liberating in the sense that it Russian became aware of a life outside of Russia, where allowed to talk about what was happening elsewhere and were able to leave Russia to study elsewhere. This would make Alexander II worthy of the title Tsar Liberator. Alexander II did not deserve the title of ?Tsar Liberator? because whilst some of his reforms could be seen as liberating the Russian public he was simply finding a new way to have a hold over them for example through debt. To truly be ?Tsar Liberator? Alexander would have had to give the public more of a say in how the county was ran, doing this would have destroyed his autocracy, which is something he was not willing to do. ...read more.