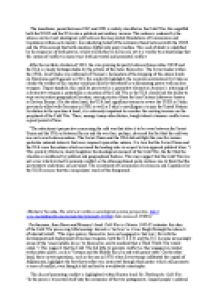 Did the Cold War prevent or promote conflict?

﻿The tumultuous period between 1945 and 1991 is widely classified as the Cold War; this engulfed both the USSR and the USA into a political and military vacuum. This notion is rendered by the intense mistrust and ideological split between the deep rooted foundations of Communism and Capitalism within each country. An underlying belief of the unknown threat between both the USSR and the USA ensured that both countries drifted into proxy warfare. This seed of doubt is solidified by discrepancies of both powers, which will further be discussed, yet it is worthy to acknowledge that this notion of conflict in many ways both prevented and promoted conflict. After the unstable situation of 1945, the ever growing disparity between former allies USSR and the USA is clearly distinguishable by the actions of the states themselves. The Soviet leader within the 1950s, Josef Stalin, was informed of Truman?s declaration of the dropping of the atomic bomb on Hiroshima and Nagasaki in 1945; this explicitly highlights the suspicion encountered by Stalin as clearly the welfare of his country could possibly be threatened by a dominating power with nuclear weapons. Unquestionably, this could be perceived as a promotive element as America?s releasing of a destructive weapon is potentially a causation of the Cold War as the USA clearly had the ability to wipe out an entire geographical location, causing mistrust from the Iron Curtain (otherwise known as Eastern Europe.) ...read more.

Therefore, we can see that the Cold War experienced relaxation periods and progression; yet this simply detracts away from this notion of global conflict, which simply has a knock on effect so to speak. 2 Colin Bown and Peter J. Mooney, Cold War to Détente 1945-85 second edition, Heinemann Educational 1981, p.5 3 Allen Hunter, Re-Thinking the Cold War, Temple University Press 1998, p.157 4 Robert Wilde, Introduction to the Cold War in Europe, http://europeanhistory.about.com/od/coldwar/p/prcoldwar101.htm, date accessed 17/3/11 The Warsaw Pact (1955) and NATO were two external bodies which were set up to enforce cooperation and mutual defence of its members. On one hand this can be regarded as constitutions who sought to protect themselves and its allies through political and military command. “military doctrines, which determine how each alliance builds and organizes its military forces are quite different…the Pact prefers large numbers of major weapons and formations over training , logistics and the command and control functions.”5 Clearly, this excerpt taken Dunbabin’s The Cold War brings to light the underlying processes taken when creating a body whose sole purpose is to use conflict towards outsiders. The fact that ‘Treaty of Friendship, Cooperation and Mutual Assistance’ revolves around a largely military based emphasis may highlight both the USA and the USSR as promoters of conflict, within 1983, the Warsaw Pact claimed to have more defence arms than NATO, giving them a significant advantage. ...read more.

Heath and Company 1963, p.81 9 Ian Pindar, The Guardian, http://www.guardian.co.uk/books/2008/aug/23/politics.roundupreviews, date accessed 17/3/11 That, coupled with his reputation for ruthlessness, he believed, would suggest that he was dangerously unpredictable.?10 This leads one to believe that the Cold War represented a war which was based on threats and the possibilities of what might happen. This offers a dichotomy; on one hand we have Nixon displaying forceful tactics and an overt willingness to engage in open warfare, yet covertly this indirectly highlights the need to prevent conflict through the use of tactics and theoretical ideas. Overall, the years 1945-1991 signified a somewhat futile period within history; it would be a travesty to forget that the Cold War plunged other countries into war as a result of largely political and ideological concepts. Both the USSR and USA created the initiative to promote peace and to prevent conflict through the creation of state organizations as previously discussed. Undeniably, propaganda becomes the epitome of promoting conflict; this is the only image the masses see of their ?enemy?, hence this retains importance in shaping the views and preconceptions of those individuals. In relation to the question, it is extremely difficult to outright state whether the Cold War prevented or promoted conflict as both notions intertwine so naturally; both link together as it is almost impossible for one to exist as a single function. We have seen this from a propaganda point of view, the fact that an image has the power to both bring about peace yet at the same time promote it. 10 Nixon ?Madam Theory,? http://www.nuclearfiles.org/menu/key-issues/nuclear-weapons/history/cold-war/strategy/strategy-nixon-madman-theory.htm, date accessed 17/3/11 ...read more.