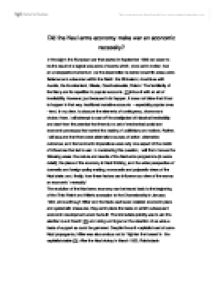 Did the n**i arms economy make war an economic necessity?

Did the n**i arms economy make war an economic necessity? In hindsight, the European war that started in September 1939 can seem to be the result of a logical sequence of events which, once set in motion, had an unstoppable momentum. As the steamroller careered downhill, areas were flattened and subsumed within the Reich: the Rhineland, Anschluss with Austria, the Sudetenland, Silesia, Czechoslovakia, Poland. The familiarity of the litany and its repetition in popular accounts [1] imbue it with an air of inevitability. However, just because it did happen, it does not follow that it had to happen in that way: traditional narrative accounts - especially popular ones - tend, in my view, to obscure the elements of contingency, chance and choice. Here, I will attempt to cast off the straitjacket of historical inevitability and start from the premise that there is no set of mechanical social and economic processes that control the destiny of politicians and nations. Rather, I will assume that there were alternative courses of action, alternative outcomes, and that economic imperatives were only one aspect of the matrix of influences that led to war. In considering this question, I will first discuss the following areas: the nature and results of the n**i arms programme (in some detail); the place of the economy in n**i thinking, and the wider perspective of domestic and foreign-policy making; monocratic and polycratic views of the n**i state; and, finally, how these factors can influence our view of the war as an economic `necessity'. The evolution of the n**i arms economy can be traced back to the beginning of the Third Reich and Hitler's accession to the Chancelorship in January 1933, since although Hitler and the Nazis eschewed detailed economic plans and systematic measures, they set in place the basis on which subsequent economic development would be built. The immediate priority was to win the election due in March [2], and doing so hinged on the retention of as wide a basis of support as could be garnered. ...read more.

assumed its centrality in his economic thinking. This concept had antecedents in Germany: World War One had taught the German military the lesson that the successful prosecution of war was premised on the total mobilization of the nation's "material and moral resources for the war effort." [20] In the aftermath of the war General Groener and others had established the need to create closer links between the economy and the military, steps towards which had been taken in the 1920s with the establishment of an officer network in important economic areas and in the creation of a Statistische Gesellschaft which served a co-ordinating function. [21] With the fulfilment of n**i political hegemony and the re-assertion of the military's political role in the 1930s, Hitler inherited these ideas and found in them a useful means by which he could influence the armed forces in the coalition of groupings that mediated his rise to power. [22] Given that economic control and rearmament were essential elements in Germany's development, the n**i government set about achieving them as circumstances allowed. Infrastructure investment and the development of productive capacity gave way to more open rearmament, and a negotiation-based foreign policy gave way to a more aggressive and expansionist dynamic as German strength and Hitler's confidence and successes increased. [23] From the linkages between Hitler's writings and directives, and from the correspondences between economic development, rearmament, and foreign policy, it is plausible to derive the idea that the war which came in 1939 was the result of an expansionist dynamic that found its well-spring in Hitler's strategic vision of Germany's place in Europe and the world. I will now turn to some of the other interpretations that have been provided for the outbreak of European war in 1939. One influential interpretation of the events of 1939 suggests that Hitler was driven to war with Poland and thereafter with Britain and France primarily as the result of domestic pressures: the argument is that the conflicts between domestic and civilian consumption created ...read more.

In conclusion, I would argue that war was not the result of economic necessity that grew out of the rearmament programme. Instead, I would argue that war was built into the Hitlerian strategy. Even if the war came `at the wrong time', Hitler's strategic aims inevitably had war at their core. The need for war and conquest drove rearmament - Germany must have living space and the materials of subsistence. In this sense, it was the necessity of making war at some stage in the future that provided the motive power for rearmament, rather than vice-versa. Hitler's foreign policy successes fuelled his popularity, his reputation as a `winner', and his own self-confidence. His plans for conquest advanced, and the economy was restructured to facilitate the future war that Hitler envisaged would give Germany mastery of Europe. His miscalculation in 1939 that Britain and France would not fight put Germany's economic capacity out of sync with the demands that his strategy made, and ultimately helped contribute to German defeat. In the sense that the success of the expansionist policy contributed to the attractiveness of further expansion it could be said that rearmament contributed to the necessity of war. Increasingly, the satisfaction of the dynamic of expansion became the only viable option available to Hitler, and Germany became `locked into' a strategy whose end-game was effectively settled once the great economies of the USA and the USSR, with their vast natural resources and production possibility frontiers, entered into the war. War was an economic necessity, not in the short-term mitigation of domestic problems, but in the long-run realisation of an expansionist dynamic that lay at the heart of Hitler's thinking. It may be too simplistically `intentionalist' to equate Hitler's desires with every development in the economic and diplomatic spheres, but there is ample evidence to suggest that the image of Hitler as the motor cortex of the German political brain is one not too far from reality. I reiterate: it was the necessity of making war that provided the motive power for rearmament, rather than vice-versa. ...read more.