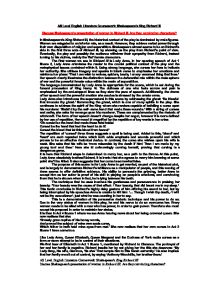 Discuss Shakespeare's presentation of women in Richard III. Are they convincing characters?

AS Level English Literature Coursework: Shakespeare's King Richard III Discuss Shakespeare's presentation of women in Richard III. Are they convincing characters? In Shakespeare's King Richard III, the historical context of the play is dominated by male figures. Women are relegated to an inferior role, as a result. However, they achieve verbal power through their own disquisition of religion and superstition. Shakespeare almost seems to be on Richard's side in the first three acts of Richard III, by showing us the play from Richard's point of view. Eventually, the play and possibly the audience withdraw their sympathy from Richard, instead turning to his victims, mainly the 'flat' female characters. The first woman we see in Richard III is Lady Anne. In her opening speech of Act 1 Scene 2, Lady Anne orientates the reader to the crucial political context of the play and the metaphysical issues contained within it. Using strong language, she curses her foes to indicate her authority. She utilises imagery and speaks in blank verse to emphasise her emotions and reinforce her pleas: 'That I can wish to wolves, spiders, toads, / or any venomed thing that lives.' Her speech clearly illustrates the distinction between the deferential role within the male sphere of war and the powerful female voice within the realm of superstition. The language demonstrated by Lady Anne is appropriate for the scene, which is set during the funeral procession of King Henry VI. The dullness of one who feels sorrow and pain is emphasised by the end-stopped lines as they slow the pace of speech. Additionally, the drama of her speech and the powerful emotion she exudes is stressed by the ornate verse. Lady Anne also introduces the supernatural in this scene by addressing the ghost: 'Be it lawful that invocate thy ghost.' Summoning the ghost, which is one of many spirits in the play. She continues to address the spirit of the King whom she renders capable of befalling a curse upon his murderer: 'Stabb'd by the self- same hand that made these wounds.' ...read more.

Her powerful speech is then demonstrated further. She uses Richard's words to answer back which makes her equal in the argument. An example of this is: when Richard says 'Say I will love her everlastingly' and Elizabeth replies by saying: 'But how long shall that title ever last?' Her quick answers are made up of short sentences which contributes to her equality in the argument due to her anger and bitterness and this contributes to the fast dialogue. It could be argued that she has new cursing power. Her continued dialogue portrays the transition that she has gone through as she continues to bring up all of Richard's wrongdoings. She points out that he can't swear on anything he hasn't wronged for he has mistreated himself, his father, God and the future. However, we begin to think that Elizabeth is softening as she ponders: 'shall I go win my daughter to thy will?' She departs allowing him to assume that she has given in. In fact he has totally underestimated her, as he hasn't seen the signs. He has already wooed Anne, so therefore he assumes that he has beaten Elizabeth, as when she departs, Richard reveals his true colours by calling her a 'relenting fool and shallow, changing woman.' The whole purpose of this was to observe how effective Elizabeth's has become. Shakespeare does this to enable Richmond to ascend. This whole process of charming Elizabeth is a reflection of the wooing but with a difference. In this case Richard hasn't succeeded as the next time the audience hears of Elizabeth in Act 4 Scene 5, she has promised her daughter to Richmond. She only spoke evasively at the end as an excuse to leave. Overall, this transition has showed Elizabeth to be a convincing character as she has defeated Richard at his own game. The old queen, Margaret, first appears in Act 1 Scene 3. ...read more.

Her language changes from passages to stichomythic lines. This is partly her role. The Duchess demonstrated how the women can change to reflect on the events occurred. Apart from appearing separately, the women appear together in some of the scenes. This has an important significance and is the main demonstration of this is in Act 4 Scene 4. This is the scene of the wailing queens, which has roots in classical and English religious drama. This scene has been particularly compared to the Iliad, the lamentations of Helena, Andromache and Hecuba. Added to this, the identification in the English religious plays probably helped to shift the audience away from Richard and towards the women. In their scenes together, the female characters have been compared to the motif of the three Mary's in the Resurrection of the Lord. In conclusion, the women are without physical power but have a metaphysical cursing power. The only power that women have is the manipulation of the curse for personal means within the male dominated society. While males gain power through physical strength, the women can utilise power through verbal strength and supernatural power. The women are generally negatively presented and there is a negative attitude towards women ruling men: 'why, this it is when men are ruled by women,' said by Richard. The women are used as a device so that we can encourage Richard to be King, whereas if the women were presented in a positive way, we wouldn't be able to support him. Overall, Queen Elizabeth, Queen Margaret and the Duchess of York are convincing characters as they all have their reasons to curse and appear throughout the play. However, Lady Anne is less convincing as she only appears twice. The first time she appears she is rather naive to believe in what Richard said, considering the circumstances. Shakespeare presented her like this so that we could side with Richard and in theory she was responsible for her own downfall. AS Level English Literature Coursework: Shakespeare's King Richard III Discuss Shakespeare's presentation of women in Richard III. Are they convincing characters? 1 ...read more.