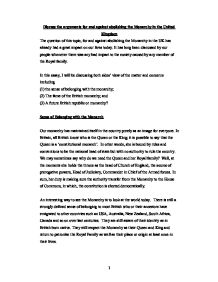 Discuss the arguments for and against abolishing the Monarchy in the United Kingdom The question of this topic, for and against abolishing the Monarchy in the UK has already had a great impact on our lives today. It has long been discussed by our people whenever there was any bad impact to the society caused by any member of the Royal family. In this essay, I will be discussing both sides' view of the matter and concerns including (1) the sense of belonging with the monarchy; (2) The fame of the British monarchy; and (3) A future British republic or monarchy? Sense of Belonging with the Monarch Our monarchy has maintained itself in the country purely as an image for everyone. In Britain, all British know who is the Queen or the King; it is possible to say that the Queen is a 'constitutional monarch'. In other words, she is bound by rules and conventions to be the national head of state but with no authority to rule the country. We may sometimes say why do we need the Queen and her Royal family? ...read more.

Moreover, the Royal family has performed so many Royal visits to other countries and helped improving the relations amongst different countries in term of both politics and economic. Because of the Fame of the Royal Family, the impact given to the country by the unsuccessful marriage of Prince Charles, Prince Andrew and Princess Anne has deeply affected the most people in Britain. The death of Princess Diana in 1997 did arise the heat topic of why Britain should have keep the Monarchy. In fact, the daily life of the Royal Family is affecting not only people in Britain but also British all over the World. Because of the fame of our Royal Family, it has become a very important asset to our country. Should we give up this valuable asset when there is any minor thing goes wrong? A Future British Republic or Constitutional Monarchy Some constitutional monarchies still survive, primarily as symbols of national unity. Among the most enduing are those of Great Britain, Norway, Sweden, the Netherlands, Belgium and Denmark. As far as the Royals are concerned in their power to reform the role model allowing British Prime Minister known as Tony Blair the leader of Labour Party to concentrate on most of the important tasks. ...read more.

However, it is still virtually impossible to come to one definite conclusion, it might have been the fact that she is still one great unspoken as the future of the Queen herself. It is absurd nowadays for a monarch to rule her death; she is over 70 years old with her fundamental attitudes and her long living service for Britain. As for the same reason, it would be cruel to expect that she will rise to the challenge of forging a thoroughly modern monarchy. Would the fame of the Royal family drive the influence to the positive direction for the country is another crucial subject for the future discussing of this topic. Would the successor of Queen Elizabeth II perform more than competent in future? Should Great Britain give up his very valuable asset due to minor bad influence given to the country by the Royal family in future? Therefore, it reminds me of the so-called ' Iron Lady' Margaret Hilda Thatcher, the old PM used to attempt to modernize Britain and to domineer the multicultural society and to enshrine the status of nation as a whole. 3 1 ...read more.