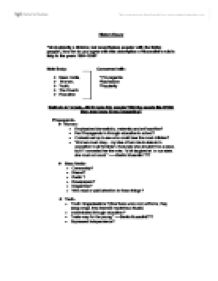 &quot;Discuss the development of the character of Othello as shown by his use of language and imagery&quot;.

History Essay "Undoubtedly a dictator, but nevertheless popular with the Italian people", how far do you agree with this description of Mussolini's rule in Italy in the years 1924-1936? Main Body: Concerned with: > Mass media, * Propaganda > Women, *Repression > Youth, *Popularity > The Church > Education Methods & Targets...Did it make him popular?Did the people like it?Did they even know it was happening? ...read more.

Propaganda- * Women- * Emphasized domesticity, maternity and self sacrifice? * Fed Propaganda in through education in school? * Contests set up to see who could bear the most children? * "Women must obey...my idea of her role in state is in opposition to all feminism. ...read more.

* Who read or paid attention to these things? * Youth- * Youth Oraganisations? [Members wore cool uniforms, they sang songs, they learned mysterious rituals] * Indoctrinated through education? * "make way for the young." ----Benito Mussolini??? * Supressed independence? * The Church- * While Mussolini governed the political side of Italy, the Roman Catholic Church governed the spiritual side. In this sense, For youth oragnisations-----answer----that fostered a sense of belonging ...read more.