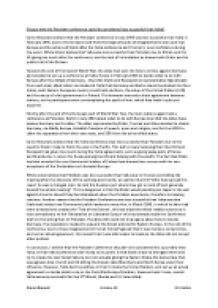 Discuss why the Potsdam Conference Could Be Considered Less Successful Than Yalta?

﻿Discuss why the Potsdam conference could be considered less successful than Yalta? Some Historians believe that the Potsdam conference in July 1945 was less successful than Yalta in February 1945, due to the tensions built from the large amounts of disagreements over post-war Europe and the actions of Stalin after the Yalta conference and Truman?s over confidence during the event. While others believe that Yalta was less successful than Potsdam due to Britain and the US giving too much after the conference, and the lack of intimidation as showed with Stalin and his public trial of the Sixteen. Towards the end of the Second World War, the allies had seen the future victory against Germany and decided to set up a conference at Yalta, Russia in February 1945 to decide what to do with Europe after the defeat of Germany. ...read more.

Some Historians believe that the Yalta Conference was less successful than Potsdam due to the need for Stalin?s help to finish the war in the Pacific. This led to many believing that Churchill and Roosevelt had given too much during the Yalta agreements, such as giving away parts of Korea and Manchuria, in return for Russia joining the UN and helping with the pacific. The fact that Stalin had also arrested the non-Communist leaders of Poland had showed less success with his non-acceptance of the Declaration on Liberated Europe. While some believe that Potsdam was less successful than Yalta due to Truman controlling the meeting after the discovery of the working atom bomb, as said by Churchill ?After having read this report he was a changed man. He told the Russians just where they got on and off and generally bossed the whole meeting?. ...read more.

In the end of the Conference, due to these disagreements Truman himself agreed that it was merely a compromise, and not an actual agreement, this meant that it was allot easier to break as the Allies did not accept other policies. In conclusion, I believe that the Potsdam Conference shouldn?t be considered less successful than Yalta, in that Yalta Conference didn?t keep to its points in that Stalin chose to disregard them and try to create his own Soviet Sphere, but not actually giving the Eastern States the democracy that was agreed. Also, the US and UK letting the Soviets take Manchuria and North Korea under their influence. However, Yalta had its positives in that it create the United Nations, and set up an actual agreement to decide what to do on the Post-War Europe Situation, however basic it was, overall Yalta was only successful for the 2nd World, (Russia and it?s later allies). Daniel Barwell History A2 Mr Hobbs ...read more.