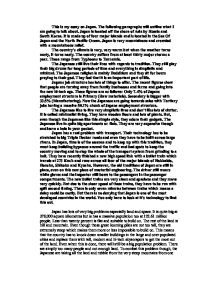 This is my essay on Japan. The following paragraphs will outline what I am going to talk about. Japan is located off the shore of Asia by Russia and South Korea. It is made up of four major islands and is located in the Sea Of Japan and the North Pacific Ocean. Japan is very mountainous and crowded with a mountainous relief. The country's climate is very, very warm but when the weather turns nasty, it turns nasty. The country suffers from at least thirty major storms a year. These range from Typhoons to Tsunamis. The Japanese still live their lives with regards to tradition. They still play their big drums for long periods of time and everything is simplistic and minimal. The Japanese religion is mainly Buddhism and they sit for hours preying to their god. They feel that it is an important part of life. Japans job structure has lots of things to offer. The recent figures show that people are turning away from family businesses and farms and going into the new hi-tech age. These figures are as follows: Only 7.4% of Japans employment structure is Primary (Raw materials). Secondary is bigger with 33.5% (Manufacturing). Now the Japanese are going towards sales with Tertiary jobs having a massive 59.1% chunk of Japans employment structure. The Japanese like to live very simplistic lives and don't like lots of clutter. It is called minimalist living. They have wooden floors and lots of plants. But, even though the Japanese like this simple style, they adore their gadgets. The Japanese live in quite big apartments or flats. They are very expensive though and leave a hole in your pocket. Japan has a real problem with transport. Their technology has to be stretched to big Triple Decker roads and even they have to be built across large rivers. In Japan, time is of the essence and to keep up with this tradition, they must keep building bypasses around the traffic and bad spots to keep the country moving and to stop the whole of the transport system from grinding to a halt. ...read more.

They have a steady rate of death rate but their Birth and population rates are soaring. The Japanese also have good health care and doctors so their rate of infant mortality is extremely low too. This is a good sign for the Japanese but the overcrowding is only going to get worse until they eventually run out of space... Japan is a really rich and well off country and there is no doubt about that. But where did it all begin and how did it all happen? Well, it started right back after the Second World War and the country had been virtually wiped out. Now, they had to get some money from somewhere and the only real place to do this was to start to go into the Iron and Steel business. When they started this they got orders from all around the world. Because they were becoming inundated with all these orders they knew that they would have to go into another phase of development and start to build big ships to transport all their raw materials into the country and all their products out. To do this they decided to go into the shipbuilding industry. When the people of the world started to get richer by the 1970's, Japan and other countries decided to help fund the growth of the transport industry. This meant that as people could afford cars of their own, they would pop down to their local Toyota dealer and go and test drive a brand new car. This was back in the 1970's when the motor industry was just starting to take off. Now people are more rich than they have ever been so the Japanese have decided to go into the High Tech industry. Not only do they sell their technology to the world but they also use it to manufacture and produce things for themselves. ...read more.

Japan is going to face more problems and that is a fact. The high tech industry isn't always going to exist. There will be a massive market change so they will have to find something else to do. People aren't always going to be queuing miles down the road for the release of the latest games console or the latest mobile phone which everybody wants. Things are going to change and it could happen at any time at all. Countries are going to face economic problems. Japan aren't always going to be as rich as they are now. When people stop buying their products and the market dies, so will their economy. If Japan are going to remain where they are at the top of the financial league, they will have to be one step ahead of their competitors just like they are now. If someone gets ahead of Japan however, it could spell trouble for the Japanese economy. My conclusion is simple. Japan are no doubt one of the best developed countries in the world. They deserve to be where they are but what they must realise is that they aren't going to be so well off forever. One little change can upset the balance of their economy drastically and their competitors are going to be on to them so the pressure is greater than ever! But, no matter how successful Japan are on the business front, their country is a mess. They have no energy, they are still looking at nuclear power, they are one of the world's worst polluters and they face an ever growing population crisis. Japan are in a mess and there is no doubt about that either. The changes have been good for the people but not for the environment. Japan has changed a lot since they were bombed and almost wiped out after the Second World War and they have changed a lot. Nobody knows how Japan will fare in the future. I guess we shall all have to wait and find out... ...read more.