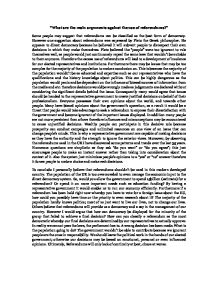 "What are the main arguments against the use of referendums?" Some people may suggest that referendums can be classified as the best form of democracy. However one suggestion about referendums was expressed by Plato the Greek philosopher. He opposes to direct democracy because he believed it will subvert people to disrespect their own decisions in which they make themselves. Plato believed the "people" were too ignorant to rule themselves well, as people would just continuously repeal the same laws that wouldn't be suitable to them anymore. Therefore the excess use of referendums will lead to a development of insolence for our elected representatives and institutions. Furthermore there may be issues that may be too complex for the majority of the population to make a conclusion on. ...read more.

In addition many people are not more persistent than others therefore influences and misconceptions may be encountered to cause unjustified decisions. Wealthy people can participate in this decisive role because prosperity can conduct campaigns and unlimited resources on one view of an issue that can change people's minds. This is why a representative government are capable of making decisions as they have the authority and the strength to ignore the exterior views. Moreover, by observing the referendums used in the UK I have discovered some patterns and trends over the last 35 years. Numerous questions are simplistic as they ask "do you want" or "do you agree"; this just encourages people to make an instant answer rather than taking into consideration about the context of it. ...read more.

Others believe that referendums will provide us a democracy and a say in the management of our country. However I would argue that how can democracy be displayed for the minority of the group that failed to achieve a final decision? How can you classify a referendum as the most democratic whereby our final decisions are determined by our representatives to actually approve. In reality we cannot pass the laws, the parliament has to. A wrong decision has been made. What is the population going to do? The government wouldn't be able to contribute because we ignorant people are the ones in responsibility. We should leave the political work in the hands of our elected government; otherwise our decisions may be based on emotional, personal or even influenced opinions. Ultimately, Referendums will only lack of continuity at best, chaos at worse. ...read more.