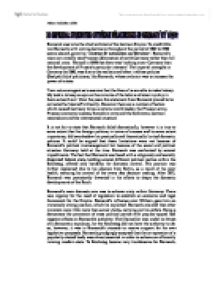 Do imperial strengths outweigh weaknesses in Germany by 1890?

Bismarck was to be the chief architect of the German Empire. To credit Otto von Bismarck with uniting Germany throughout the period of 1862 to 1890 seems absurd, given his "contempt for nationalism and liberalism". Bismarck's main aim initially was Prussian domination of north Germany rather than full national unity. He said in 1958 that there was 'nothing more Germany than the development of Prussia's particular interests'. The imperial strengths in Germany by 1890, was due to the realistic and often ruthless policies (Realpolitik) of politicians, like Bismarck, whose only aim was to increase the power of a state. 'I am not so arrogant as to assume that the likes of us are able to make history. My task is to keep an eye on the currents of the latter and steer my ship in them as best I can.' Over the years this statement from Bismarck proved to be corrected he 'steered' brilliantly. However there are a number of factors which caused Germany to be a supreme world leader, the Prussian army, Prussian economic success, Economic unity and the Zollverein, German nationalism and the international situation. It is not fair to state that Bismarck failed domestically, however it is true to some extent that his foreign policies, in terms of success and to some extent importance, did overshadow his practically and theoretically limited domestic policies. It could be argued that these limitations were not because of Bismarck's political mismanagement but because of the social and political situation Germany held at the time. ...read more.

Relations began to ripen, following the death of Pope Pius IX, 1878, Bismarck was able to negotiate with his successor, Leo XIII. Falk was dismissed and exiled clergy were allowed to return to their positions. However, it was not all victorious for the Catholics. Many of the May Laws remained in force, Jesuits were forbidden to remain in Germany and the State continued to oversee all permanent Church appointments. Once again, Bismarck uses his experience in turning failure into an alternative success, harnessing Catholic political power in the Reichstag to deal with a potentially bigger threat, Socialism. Economic growth in the 1850s and 1860s outstripped that of Austria and France, by the mid 1860's more coal and steel were produced than of France or Austria, it also had a more extensive railway network. In 1865 she possesses 15,000 steam engines with a total horsepower of 800,000. Austria, by contrast had 3,400 steam engines with a total horsepower of 100,000. Bismarck was able to capitalise on the mistakes of his opponents in order to strengthen Germany an example of this is when Bismarck was able to do this was in 1864 with the Schleswig-Holstein situation. The combined forces of Austria and Prussia entered Schleswig-Holstein to face the Danish forces. Prussian nationalists, who favoured the grossdeutsch idea, were in favour of this action as the Germany speaking people in Schleswig-Holstein were to be freed from Danish control and put under Prussian control. However the situation that occurred was that Schleswig and Holstein were split between Prussia and Austria. ...read more.

Bismarck saw the opportunity for again limiting Frances allies and decided to welcome Italy in an alliance, showing neutrality to Russia and Austria. Bismarck was able to restrain Italy in Africa and signed further agreements with Bulgaria. In 1884, Bismarckhad managed to be on good terms with France, marking the zenith of his system. A crisis in Bulgaria had shattered the Three Emperor's Alliance. The issue over the Balkans had become another threat, however Bismarck refused to take sides in the dispute. As Russo-Austrian relations grew weaker, Bismarck's fear of France grew stronger, he could sense a Franco-Russian alliance coming to play, where Nationalistic feeling was created. Furthermore, pro-French ministers in Russia seemed to be exerting great influence over the Tsar. In February1887 the Triple Alliance was renewed, Bismarck had persuaded Austria to promise to consult Italy on all matters affecting the Balkans, the Adriatic and the Aegean. Events finally turned in Bismarck's favour. France avoided Russian feelers and conservative diplomats won the upper hand in St. Petersburg. Tsar Alexander III accepted that an alliance with Germany was better than nothing and signed the Reinsurance Treaty in June 1887. The agreement was that if a third power went to war on Germany, Russia would remain neutral, and vice versa. This treaty did not contravene with the Dual Alliance and was seen to be a masterpiece of Bismarck's diplomatic juggling. Finally, Bismarck secured peace in the Balkans and between the European powers by publishing the Dual Alliance in February 1888. This threatened Russia Germany would side Austria if war was to come about. This along with rumours of the Mediterranean Agreement persuaded Russia to leave the Balkans alone. Fahim Talukder L6SD ...read more.