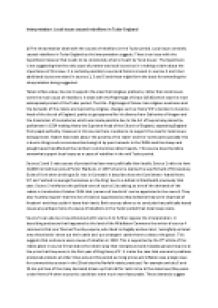 Do the sources suggest that local issues caused rebellions in Tudor England?

﻿Interpretation: Local issues caused rebellions in Tudor England a) The interpretation deals with the causes of rebellions in the Tudor period. Local issues certainly caused rebellions in Tudor England as the interpretation suggests. There is an issue with the hypothesis however that needs to be considered; what is meant by ?local issues?. The hypothesis is not suggesting that the only cause of protest was local issues but it?s making a claim about the importance of this issue. It is certainly possible to see local factors at work in sources 2 and 4 but additional issues are raised in sources 1, 3 and 5 and these might form the basis for amending the interpretation being suggested. Taken at face value, Source 2 supports the view that religious problems, rather than local issues were the main cause of rebellions. It deals with the Pilgrimage of Grace (1536) which was the most widespread protest of the Tudor period. The title -Pilgrimage of Grace- has religious overtones and the demands of the rebels are inspired by religious changes such as Henry VIII?s decision to become head of the church of England, partly to get approval for his divorce from Catherine of Aragon ...read more.

In describing enclosure that happened to the land of the Middleton Commons the writer of source 4 comments that one Thomas Thursby esquire, who liked to illegally enclose land, ?wrongfully entered onto these lands? drove out their cattle and ?put strangers? cattle there to devour the grass?. This suggests that enclosure was a cause of rebellion in 1549. This is supported by the 5th article of the rebels given in source 5 that states the rebels ?pray that reed ground and meadow ground may be at the price that they were in the first year of King Henry VII?. It is also the case that economic problems prompted protests at other times around this period as rising prices and inflation was a large issue for communities as seen in the 29 articles the Norfolk rebels produced. For example articles 5 and 14 are just two of the many demands drawn up that call for rents to be at the same level they were under Henry VII when economic conditions were much more favourable. These demands suggest that perhaps harsh economic conditions of 1549 were a major cause of unrest. ...read more.

b) A historian would find these sources useful for many reasons including the variety of viewpoints, different interpretations they offer and questions they answer. The set of sources includes evidence from most of the main protests over the whole Tudor period. The balance of voices from different social classes is apparent as the sources consist of rebels demands but also include views from nobility as there is a chronicle written at Merton College in Oxford showing a differently put forward opinion in source 1. It is also possible to see different perspectives on the causes of rebellion in these sources. As well as the local issues suggested in the interpretation, we can see religious aims in source 2 and economic aims in sources 4 and 5. These additional sources give the issue of why people protested a much rounder character. The most apparent reason for the sources not being useful was the lack of ranging types of source, there were no official documents such as court records or state papers for example, nor were there any visual sources. Having included slightly more types of sources would have given a further rounded character of why people protested and would be somewhat more useful in determining whether the interpretation was valid. ...read more.