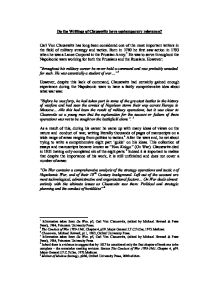 Do the Writings of Clausewitz have contemporary relevance?

Do the Writings of Clausewitz have contemporary relevance? Carl Von Clausewitz has long been considered one of the most important writers in the field of military strategy and tactics. Born in 1780 he first saw action in 1793 when he was a Lance Corporal in the Prussian Army.1 He was to serve throughout the Napoleonic wars working for both the Prussians and the Russians. However: "throughout his military career he never held a command and was probably unsuited for such. He was essentially a student of war..."2 However, despite this lack of command, Clausewitz had certainly gained enough experience during the Napoleonic wars to have a fairly comprehensive idea about what war was: "Before he was forty, he had taken part in some of the greatest battles in the history of warfare and had seen the armies of Napoleon storm their way across Europe to Moscow... Alls this had been the result of military operations, but it was clear to Clausewitz as a young man that the explanation for the success or failure of these operations was not to be sought on the battlefield alone".3 As a result of this, during his career he came up with many ideas of views on the nature and conduct of war, writing literally thousands of pages of manuscripts on a wide range of areas ranging from politics to tactics.4 After the wars end, he set about trying to write a comprehensive eight part 'guide' on his ideas. This collection of essays and manuscripts became known as "Vom Kriege" (On War). Clausewitz died in 1831 having only completed six of the eight parts.5 Indeed it is important to realise that despite the importance of his work, it is still unfinished and does not cover a number of areas: "On War contains a comprehensive analysis of the strategy operations and tactics of Napoleonic War, and of their 18th Century background. ...read more.

violence: "How are we to counter the highly sophisticated theory that supposes it is possible for a particularly ingenious method of inflicting minor direct damage on the enemy's forces to lead to major indirect destruction; or that claims to produce by means of limited but skilfully applied blows, such paralysis of the enemy's forces and control of his willpower as to constitute a significant shortcut to victory"23 This argument clearly shows that not all of Clausewitz has aged well - obviously during the Napoleonic era the idea of information warfare did not exist - so it would have been next to impossible to win a war using non violent means - however as has been shown in this age it is at least technically possible to achieve such a victory. It suggests that some parts of Clausewitz's work should perhaps be seen as less relevant to certain situations than others. One area which appears to still be relevant is Clausewitz's comments on the application of force. In the West today public opinion seems to favour engagements with minimal casualties - the public seem to want intervention when scenes of suffering are on TV (the so called CNN effect), but at the same time seem unwilling to tolerate the idea of people dying to stop the suffering24. This is a situation where Clausewitz noted that: "If one side uses force without compunction, undeterred by the bloodshed it involves while the other side refrain, the first will gain the upper hand".25 This idea seems to have been taken onboard by a number of third world leaders who have engaged in some form of conflict with Western Countries (primarily the USA). A good example of this is the conflicts in Somalia - when the USA sent in troops to help restore order to the country they were hampered by restrictive rules of engagement and limited amounts of equipment - for example tanks as these were felt inappropriate.26On the other hand, the opposition led by self styled Warlord ...read more.