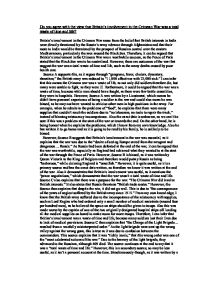 Do you agree with the view that Britain's involvement in the Crimean war was a total waste of time and life?

Therefore, I can infer that Britian's involvement was a waste of time and life, because many soldiers lost their lives due to lack of medical provisions. Source C then explains that "the Charge of the Light Brigade... resulted from a woefully misinterpreted order." As the light brigade were sent up the wrong valley against the wrong guns, this is true as it was due to confusion between the commanders. This source explains that it was "richly ironic," that this wrong order was one of the "most celebrated actions of the war." Due to the bravery of the light brigade, they advanced to the Russians, although 409 died. The source continues at the end to say that it was a "total waste of time and life." However, this is a secondary source, so may be less useful, as it isn't a personal account at the time. Simultaneously though, as it was written by a historian, it is likely he would have collected information from a range of useful primary sources to write Source C. As it is from the book 'The Making of Modern Britain' he will have written it for a purpose to entertain and may have tried to give a different opinion from most historians to sell more books. ...read more.

However, the allied governments had convinced themselves that the Russian naval base of Sebastopol had to be taken. Therefore, the war does seem a total waste of time and life, because capturing Sebastopol was not a British aim at the start of the war. However, sanitation and clean water problems reflected the state of hospitals in Britain. Also whether it arose from Florence Nightingale or not, sanitation did improve. Also the Crimean War caused the 'Nightingale fund' which created the Nightingale Training school for nurses at St Thomas' Hospital in London in 1860. This improved the standard of female nursing and caused more middle class women to see nursing as a respectable job. Also due to Russell's war reporting, the Crimean War caused the British public to view soldiers as brave rather than as dangerous or as very low class. The Victoria Cross was a medal that awarded bravery and was made available to all ranks, showing that the war did cause better respect for ordinary soldiers. Furthermore, despite public outrage that Sebastopol was given back to the Russians, this hadn't been the reason for War. Therefore, as Britain had stopped Russia being a threat to them and due to the health and military reforms, Britain's involvement in the Crimean War wasn't a total waste of time and life. ...read more.