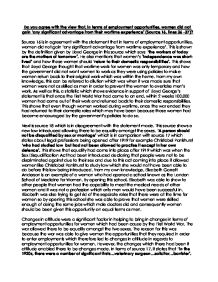 Do you agree with the view that, in terms of employment opportunities, women did not gain any significant advantage from their wartime experience (Source 16, lines 36-37)?

From my own knowledge, Elizabeth Garrett Anderson is an example of a woman who had opened a school known as the London School of Medicine for Women. By opening this school, Elizabeth was able to show to other people that women had the capability to meet the medical needs of other women and it was not a profession which only men would have been successful in. Elizabeth was also trying to get rid of the separate roles that there were at the time for women so by opening this school she was able to prove that women were skilled enough of doing the same jobs which male doctors did and consequently women should be been given this opportunity on equal terms as men. Changes in attitude were a significant factor in helping to bring in changes in terms of employment opportunities for women which had been cause by the First World War. The war allowed there to be equality amongst the two sexes. The reason for this was because the war was able to give women the opportunities that they required in order to enter employments which therefore led to changes in attitude in regards to employment opportunities for women. ...read more.

If the government did not introduce the s*x Disqualification Act, it would have meant that women would not have had the employment opportunities which they had after this act had been brought into place. Due to the First World War, there were changes in attitude therefore allowing opportunities for women to gain employment in different professions in equal terms as men so therefore due to the changes which had been made during the war in attitudes, it led to new laws to be brought in, in order to encourage women to find jobs rather than returning to their domestic responsibilities after the war had ended. Also, examples of women such as Elizabeth Garrett Anderson and Christabel Pankhurst would not have been able to achieve what they had if the war did not break out as it was because of the war that caused changes in attitude which therefore resulted in changes to be made in employment opportunities in employment. So, I think that it was because of women's wartime experiences that led them to have the advantage to gain more opportunities in employment. ...read more.