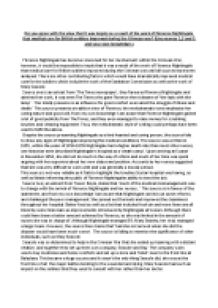 Do you agree with the view that it was largely as a result of the work of Florence Nightingale that medical care for British soldiers improved during the Crimean war? (Use sources 1,2 and 3 and your own knowledge.)

She spread out the beds and improved the cleanliness throughout her hospital. Better food as well as a list that includes fresh air and more linen are all listed by some historians as improvements introduced by Nightingale at Scutari. Although there could have been a better amount achieved by Florence, as she was limited in the amount of nurses she was in charge of. Although Nightingale managed 39, Mary Stanley; her rival, managed a larger team. However, the source then claims that ?had she not arrived when she did the disaster would have been much worse?. The source is failing to mention the significance of other individuals, such as Mary Seacole. Seacole was so determined to help in the Crimean War that she ended up teaming with a distant relative, and together they set up their own company; Seacole and Day. The company?s aim was to buy medicines and home comforts and set up a store and ?hotel? near to the front line at Balaclava. ...read more.

Source three also makes reference to the high death rate there was in 1854/55 which was mentioned in source one. Due to the Sanitary Commission, the death rate fell from 42% down to 5.2%. Florence Nightingale is displayed as having caring traits in source three, the same traits which made her a great figure for the press to latch on to. Overall this source is the most reliable out of the three, as it takes into accord the good Florence achieved as well as the achievements of others. In conclusion I do not agree with the view that it was largely as a result of the work of Florence Nightingale that medical care for British soldiers improved during the Crimean War. There are certain aspects of Nightingales work which led to medical improvements, but Nightingale was only responsible for allowing the improvement to begin. It Florence who called out the Sanitary Commission and gained publicity from The Times and funds for the hospital, but there were other nurses and people who were making a difference and improving medical care as well. ...read more.