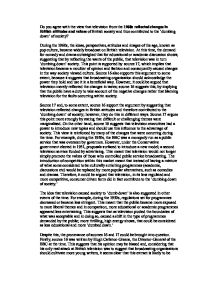 Do you agree with the view that television from the 1960s reflected changes in British attitudes and values of British society and thus contributed to the dumbing down of society?

Do you agree with the view that television from the 1960s reflected changes in British attitudes and values of British society and thus contributed to the 'dumbing down' of society? During the 1960s, the ideas, perspectives, attitudes and images of the age, known as pop culture, became widely broadcast on British television. At this time, the demand for comedy and drama outweighed that for educational or academic discussion shows; suggesting that by reflecting the wants of the public, that television was in turn 'dumbing down' society. This point is supported by source 17, which implies that television became a moulder of opinion and fashion and consequently caused changes in the way society viewed culture. Source 16 also supports this argument to some extent, because it suggests that broadcasting organisation should acknowledge the power they hold and use it in a beneficial way. However, it could be argued that television merely reflected the changes in tastes; source 16 suggests this, by implying that the public have a duty to take account of the negative changes rather that blaming television for the faults occurring within society. ...read more.

The idea that television caused society to 'dumb down' is also suggested in other events of the time. For example, during the 1950s, regulations set for programmes decreased or became less stringent. This meant that the public became more exposed to more liberal themes and in comparison, more educational or academic programmes appeared less entertaining. This suggests that as television pushed the boundaries of what was acceptable and in doing so, caused a shift in the type of programmes demanded by the public; more thrilling, high energy shows, that could be considered as less educational and more 'dumbed down.' Despite this, the provenance of sources 16 and 17 could be brought into question. Firstly, source 16 was written by Hugh Carleton-Greene, the Director-General of the BBC at the time. This suggests that his opinion may be biased and, considering that his only real attack at British television was to suggest that broadcasting organisations should cultivate more young writers, it seems clear that this extract is likely to be subjective. This means that source 16 has a limited reliability, however, it is useful is illustrating the limited opinion of a person working within the media at the time. ...read more.

Source 17 suggests this to a lesser extent, but still implies that television set out to offer some challenges and deliver pop culture to the public. There are several points that suggest a similar argument. For example, during the 1960s, as more channels were introduced and television became a more competitive market, it responded by producing shows demanded by the public. Therefore it could be argued that rather than the television moulding public opinion and 'dumbing down' society, it was simply mirroring the changes in tastes of the public. As stated previously, the provenance of sources 16 and 17 can be brought into question; source 16 can be considered as biased and subjective, due to the author of the piece and is therefore less reliable, while source 17 is more reliable as it is from a academic, historical text. Both sources also have evident uses; source 16 gives the limited opinion of a person working within the media and source 17 gives a general, reliable overview of the time in question. In conclusion, as source 17 most strongly supports the idea that television reflected the changes in society and helped to contribute to the overall 'dumbing down' of society, it carries the greatest weight. This suggests that the sources partially support this idea (more that they contradict it). ...read more.