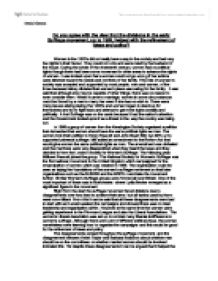 Do you agree with the view that the divisions in the early Suffrage movement, up to 1903, helped with the refinement of ideas and policy?

Do you agree with the view that the divisions in the early Suffrage movement, up to 1903, helped with the refinement of ideas and policy? Women in the 1800's did not really have a say in the society and had very few rights in their favour. They could not vote and were ruled by the husband of the house. During the whole of the nineteenth century, women had no political rights though there had been some movement in other areas to advance the rights of women. It was looked upon that a woman could not go wrong if her actions were directed toward the needs and comforts of her family. This role of women in society was accepted and supported by most people, men and women, of the times because history dictated that women's place was caring for the family. It was said that although she may be capable of other things, there was no reason to even consider them. When it came to marriage, women in some circumstances could be forced by a man to marry her even if she has no wish to. There were many issues arising during the 1800's and women began to stand up for themselves and try to fight back and attempt to get more rights socially and politically. ...read more.

Although there were a lot of different political views, the women nonetheless were learning how to organise the campaigns and this would be good for the refinement of ideas and policy. The disagreements spread throughout the suffrage movement, and the disagreement between Helen Taylor and Barbara Bodichon about whether men should be on the committees or whether married women should be involved indicated this. Yet despite these disagreements it can be argued that it helped the women to work out what they believed in. In addition to this it can be said that working with the Liberals also helped to refine ideas and their policies. So many campaigns had begun that the movement began to split apart and new "splinter groups" were formed, some more influential than others, with some women to work on establishing colleges for women, others to work on legal reform and others to work on improving the conditions of working-class women. One of the most influential splinter groups was the Woman's Franchise League. The Women's Franchise League was founded in 1894 by Emmeline Pankhurst which won for married women the right to vote in elections for local offices. ...read more.