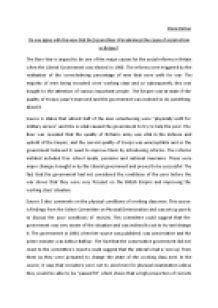 Do you agree with the view that the Second Boer War advanced the cause of social reform in Britain?

﻿Olivia Clinton Do you agree with the view that the Second Boer War advanced the cause of social reform in Britain? The Boer War is argued to be one of the major causes for the social reforms in Britain when the Liberal Government was elected in 1906. The reforms were triggered by the realisation of the overwhelming percentage of men that were unfit for war. The majority of men being recruited were working class and so subsequently, this was bought to the attention of various important people. The Empire was at stake if the quality of troops wasn?t improved and the government was inclined to do something about it. Source 6 states that almost half of the men volunteering were ?physically unfit for military service? and this is what caused the government to try to help the poor. ...read more.

The government in 1904, when the source was published, was conservative and the prime minister was Arthur Balfour. The fact that the conservative government did not react to the committee?s reports could suggest that the Liberal?s had a ?one-up? from them as they were prepared to change the state of the working class men. In the source, it says that recruiters were not to send men for physical examination unless they would be able to be ?passed fit? which shows that a high proportion of recruits would have been overlooked in statistics. The fact that the men are unfit shows the how poor the conditions are that they live with, and the committee realises this. They know it is a problem as it ?causes anxiety for the future as regards recruiting?. Solving the problem would mean a drastic change in how the poor were helped and so in this source, the physical condition of men outlined that reforms should be made. ...read more.

I agree with the statement that the Boer war advanced the cause of social reforms in Britain because the government was reliant on the quality of its troops to protect the British Empire. The reforms would have improved the quality of life for the working class and consequently improved their physical fitness meaning they would be more effective in fighting wars. However, it could be argued that the reforms were just a political stunt for the Liberals to take government. Also, it could be seen that the war was just the moment where it came to public concern that the troops were inadequate and the government needed to make changes. All in all, the Boer war did contribute to the social reforms, whether it being out of genuine concern for the living standards of the working class, wanting to build the men up for the good of the empire, or because the government was almost forced to make changes. ...read more.