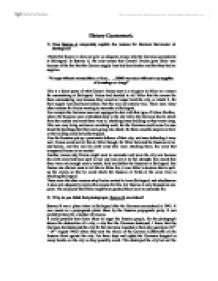 Does Source A adequately explain the reasons for German Surrender at Stalingrad?

History Coursework. 1) Does Source A adequately explain the reasons for German Surrender at Stalingrad? I think that Source A does not give an adequate reason why the Germans surrendered at Stalingrad. In Source A, the only reason that General Paulus gave Hitler was because of the fact that the German supply lines had been broken and that they had no supplies: "Troops without ammunition or food... ...18000 wounded without any supplies of dressings or drugs" This is a direct quote of what General Paulus sent in a telegram to Hitler as a reason for surrendering at Stalingrad. Paulus had decided to tell Hitler that the reason for them surrendering was because they could no longer hold the city, or attack it, for their supply lines had been broken. But this was not entirely true. There were many other reasons for Paulus wanting to surrender at Stalingrad. For example the Germans were not equipped to deal with this type of Urban Warfare, where the Russians were embedded deep in the city while the Germans had to attack from the outside and work there way in, checking every building as they went along. This was very tiring and nerve wracking work, for the Germans could never be sure about the buildings that they were going into check, for there could be snipers in their or the building could be booby trapped. Also the Russians put up a passionate defence of their city, and were defending it very well. Paulus could not tell this to Hitler though, for Hitler believed the Russians to be sub-human, and this was his sixth army who were attacking them, the army that conquered France in six weeks! ...read more.

For Source D shows the German supply lines being attacked upon. I think that it was the lack of supplies that hurt Germany the most, for they were in the middle of Russia, miles away from anything German, and they had just come out of a long hard Russian winter in which no supplies could get to them anyway. They were out of supplies before the Germans encircled them. 4) Why are these two interpretations about the end of the battle of Stalingrad so different? Sources E and F are so different because they are trying to do two different things. Source E is a German propaganda broadcast trying to say that it doesn't matter that they have lost Stalingrad, but they had held off the Germans and so the rest of Germany might be spared: "... it tied down strong enemy forces for a number of weeks of the fiercest fighting." But this was not true. The Germans did not hold the Russians down for a number of weeks, the Germans were completely surrounded and they could not do anything. This Source is also completely empty of facts. That is the reason, I think, that they put this notice over the radio. The whole point of the broadcast was to keep moral up; it was to stop the German Citizens and the other soldiers panicking. Source F is an extract from a Russian history textbook. The point of this was to prove to everyone that the Russians won convincingly. As this is textbook, it gives a lot of facts, most of which are true. ...read more.