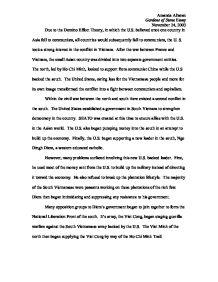 Due to the Domino Effect Theory, in which the U.S. believed once one country in Asia fell to communism, all countries would subsequently fall to communism, the U. S. took a strong interest in the conflict in Vietnam.

Due to the Domino Effect Theory, in which the U.S. believed once one country in Asia fell to communism, all countries would subsequently fall to communism, the U. S. took a strong interest in the conflict in Vietnam. After the war between France and Vietnam, the small Asian country was divided into two separate government entities. The north, led by Ho Chi Minh, looked to support from communist China while the U.S backed the south. The United States, caring less for the Vietnamese people and more for its own image transformed the conflict into a fight between communism and capitalism. Within the civil war between the north and south there existed a second conflict in the south. The United States established a government in South Vietnam to strengthen democracy in the country. SEATO was created at this time to ensure allies with the U.S. in the Asian world. The U.S. also began pumping money into the south in an attempt to build up the economy. Finally, the U.S. began supporting a new leader in the south, Ngo Dingh Diem, a western educated catholic. ...read more.

Many Buddhist monks set themselves on fire in protest of these laws, and news coverage was shown around the world. Many began criticizing U.S. support of Diem. A military coup, encouraged by the U.S., soon follows. Diem was killed. Johnson, a new president in power, began to escalate an air war against Vietnam along with sending more ground troops. By 1968, 550,000 troops were in Vietnam. Conflicts between the South Vietnamese army and the U.S. army caused the two to split and fight the war separately. The U.S. army began having trouble distinguishing who the enemy actually was. The confusion eventually led to "search and destroy" tactics. This strategy involved destroying whole villages, crops, ammunition, etc. The intent of the combat was supposedly to improve South Vietnam, but in reality, it was only being destroyed. This created much animosity toward the U.S. military. The success of the soldiers was inflated as it was relayed to the people at home. Because of the inflated numbers, many Americans supported the war. However, public opinion began to change during the Tet Offensive. ...read more.

These views are expressed in Francis Ford Coppola's film, Gardens of Stone. In the film, the opposing views are expressed by two main characters. Rct. Jackie Willow displays pro Vietnam sentiments. He yearns to leave the Old Guard at Arlington National Cemetery, hoping to become an officer and fight in Vietnam. Sgt. Clell Hazard on the other hand, criticizes the war. Sharing similar views on the war is his girlfriend, Samantha Davis. She is a journalist who participates in protests of the war. Repeatedly, soldiers in the film frustratingly speak of the war saying that there is no enemy. They describe the war as being unlike any other; it's everywhere. The rules are all different. However, none of these warnings convince Rct. Willow to stop aching for battle. Not even his new wife can convince him to stay. Willow goes to Vietnam, and like so many others is killed in battle. After getting to know Willow's lifestyle, his family, and friends; it is easy to see the film's more persuasive stance on the war. It is easy to hear statistics on the death toll of the war, but it becomes very difficult to pardon the death of an individual who is known personally. Amanda Altazan Gardens of Stone Essay November 24, 2003 ...read more.