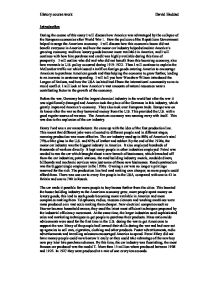 During the course of this essay I will discuss how America was advantaged by the collapse of the European economies after World War 1. How the policies of the Republican Government helped to surge the American economy

Introduction During the course of this essay I will discuss how America was advantaged by the collapse of the European economies after World War 1. How the policies of the Republican Government helped to surge the American economy. I will discuss how this economic boom did not benefit everyone in America and how the motor car industry helped stimulate America's growing economy, and how luxury goods became more available in America, and I will continue with how hire purchase and credit was highly available during this time of prosperity. I will outline who did and who did not benefit from this booming economy, also how reversals in U.S. policy occurred during 1919-1922. Then I will continue to explain the McCumber traffic act which issued a tariff on foreign goods entering America to encourage Americas to purchase American goods and thus helping the economy to grow further; leading to an increase in customer spending. I will tell you how Woodrow Wilson introduced the League of Nations, and how the USA isolated itself from the international community so as to avoid conflict. I will look at how America's vast amounts of natural resources were a contributing factor to the growth of the economy. ...read more.

This boosted the house building industry as the American economy grew, more people spent money on luxury goods, this lead to such goods becoming more available in America and more companies making them. Telephones, radios, vacuum cleaners and washing machines were mass produced on a vast scale making them cheaper. New electrical companies such as Hoover became household names; they used the latest most efficient techniques proposed by the industrial efficiency movement. At the same time, the larger industries used sophisticated sales and marketing techniques to get people to purchase their products. Mass nationwide advisements were used for the first time in the U.S. during the war to get Americans to support the war. Many of the people had learned their skills during the war and had now set up agencies to sell cars, cigarettes, clothing and other products. Poster advertisements, radio advertisements and travelling salesmen encouraged America to spend. Even if they did not have money people could now borrow it easily or they could take advantage of the new buy now pay later hire purchase schemes. By this time, the car industry was flourishing; the most famous car produced was the model T. More than 15 million where produced between 1908 and 1925. ...read more.

After the war, Europe imported less food from the U.S. This was partly because, Europe was poor and partly due to the tariffs which stopped Europe from exporting to the U.S. farmers were also struggling against competition from the efficient Canadian wheat producers. The population of the U.S. was falling which meant there where fewer mouths to feed. At the route of all these difficulties was overproduction. This resulted in wheat being produced which simply nobody wanted. In the 1920s the U.S. farmer was each year producing enough to feed his family and 14 others. Prices dropt dramatically as desperation kicked in and farmers tried to sell their produce. Most farm prices fell by 50 per cent. Hundreds of rural banks collapsed in the 1900s and there were five times as many farms going out of business as there had been in the 1900s and 1910s. Not all farmers were affected by these problems. Wealthy Americans wanted fresh vegetables throughout the year. For most farmers, the 1920s were a time of great difficulty .and this was a major concern. About half of all Americans lived in rural areas; the difficulty affected more than 60 million Americans. Lots of Americans lost their jobs, these where largely unskilled workers, mainly immigrants. ?? ?? ?? ?? History course work David Haddad ...read more.