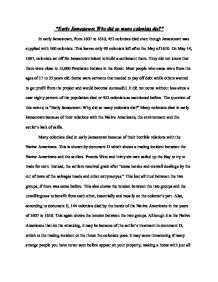 Early Jamestown: Why Did So Many Colonists Die? In early Jamestown, from 1607 to 1610, 452 colonists died even though Jamestown was supplied with 560 colonists.

Blanton of the William and Mary College. They would later drink the water and would get sick and eventually die from disease. The tides also contributed in killing colonists because when it is a high tide, the salt water would come into their fresh water rivers and creeks, making the water brackish and would make it bad to drink. Drinking too much brackish water is not good for you and can give you a disease and kill you. The tides also mixed the water which further contaminated the water. Droughts killed many colonists in the Jamestown drought in 1607 to 1611 shown by document B that shows tree rings which is an evaluation of what happens to the tree. If the ring is thicker, that was period of wet weather and if the ring is thinner, than that was a period of dry weather. The ring was thinnest and longest under average rainfall in 1607 to 1611 which was mentioned before. A drought is a long period of dry weather, long enough to harm crops. ...read more.

This lack of skills may be because the colonists were just going to get rich with gold and neglected the fact that they needed food on board the ships and put on other useless equipment. There lack of skills also set up bad relations with the Native Americans. If they had better social skills, than they would be able to cooperate with them. Because of this, they lost a valuable trading partner. There lack of social skills was shown again in document E with their "harsh dealings" with the "salvages." This lost all trust between the colonists and Native Americans. Therefore, many colonists died in early Jamestown because of the relations with the Native Americans, typically the trading incident with cutting extremetyes, the environment, which is the contamination of water, tides and droughts, and finally the lack of skills, which are jobs that provide food, help the sick and social skills with the Native Americans. All these problems were a major obstacle for the colonists which only 90 people got over from 560 colonists. These obstacles that faced the colonists really changed the development of the settlement of Jamestown and affected the approach of future settlements. ...read more.