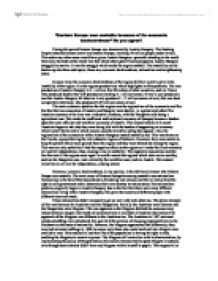 &quot;Eastern Europe was unstable because of its economic backwardness&quot; Do you agree?

"Eastern Europe was unstable because of its economic backwardness" Do you agree? During this period Eastern Europe was dominated by Austria-Hungary. The Hasburg Empire stretched across central and eastern Europe, invoking 50 million people under its rule. This under any other sense would have given Austria-Hungary a powerful standing in the world. However, the truth of the matter was that whilst other great Powers prospered, Austria-Hungary struggled to survive. It was this struggle which made the region unstable. The instability can be broken up into three sub topics, these are; economic backwardness, nationalism and neighbouring states. In some ways the economic backwardness of the region did have a part to play in the instability of the region. It is the regions productivity which highlights its first problems. The iron production of Austria-Hungary is 2.1 million, this falls short of other countries, such as France who produced double that with production reaching 4.1 million tonnes. It was in coal production too that Austria-Hungary fell short as it only produced 1.17 million tonnes of coal; this was short compared to Germany, who produced 3.85 million tonnes of coal. The main economic problem for this region was the regionalism of the economies and the fact that the two economies of Austria and Hungary were dualist, i.e. ...read more.

The approach of the Magyars was different to the Austrians too. The Austrians in 1907 universal manhood suffrage was introduced, this got rid of the practise of choosing representatives to the Reichsrat on the basis of nationality. However, the Magyars approached this differently; they received universal suffrage in 1908, however only those who could read and write Magyar were entitled to vote. This resulted in less then 7% of the population in having the right to vote, enabling the Magyars to remain in power. The Magyars still carried on with its discrimination, by implementing the policy of Magyarisation, this meant everyone had to speak Magyar in schools, even though some schools didn't have any Magyars within its staff or pupils. This angered a lot of people as it was deemed as a culture being forced on a group who didn't want it. This lasted from 1853 to 1918. This caused instability as it meant that minorities soon began to get angry and this caused more tension in the region. The second most important reason why there Eastern Europe was unstable was due to neighbouring states. This is even truer with Pan-Slavism. The Russians and Serbs had always shared a common identity as they were both Slav countries, this gave the belief to Russia that it had to protect its "brother" Serbia, and they were just as determined as each other to get one up over Austria-Hungary. ...read more.

Even though economic backwardness had a part to play by angering minorities such as the Czechs who were forced to share profits with those who didn't deserve it, i.e. the Hungarians. This was only caused some tension and it was nothing compared to the other two reasons. The main cause of Eastern Europe becoming unstable was the sense of nationalism in the region. This nationalism meant that minorities, especially those in Hungary were not given many rights, especially when the Magyars provided over 90 % of important posts. This came at a time where minorities such as Serbs, Croats and Slavs all demanded better civil rights such as the creation of national universities and the allowance of their language to be used in local government. The introduction of Magyarisation only added fuel to the movement. Also with the "Neighbouring States" situation and Pan-Slavism it bought about the next main reason of the instability. It was due to events such as the Bosnian Crisis and the Balkan Wars which bought about war. This was due to the fact that it made Serbia and Austria hate each other more and more and the anger of the Serbs due to the Balkan Wars bought about the assassination of Archduke Franz Ferdinand in 1914, which bought war to the region of Eastern Europe, signifying the level of instability in the region due to reasons other then economic backwardness. ?? ?? ?? ?? ...read more.