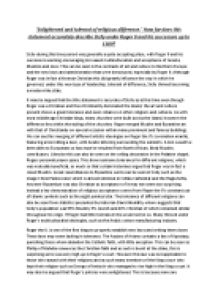 'Enlightened and tolerant of religious difference.' How far does this statement accurately describe Sicily under Roger II and his successors up to 1189?

Transfer-Encoding: chunked ﻿'Enlightened and tolerant of religious difference.' How far does this statement accurately describe Sicily under Roger II and his successors up to 1189? Sicily during this time period was generally a quite accepting place, with Roger II and his successors seeming encouraging increased multiculturalism and acceptance of Greeks, Muslims and Jews. This can be seen in the contrasts of art and culture to Northern Europe and the new laws and administration that were introduced, especially by Roger II. Although Roger was in fact a Norman Christian this did greatly influence the way in which he governed, under this new type of leadership, tolerant of difference, Sicily thrived becoming a modern-like state. It may be argued that the title statement is accurate of Sicily as at this time even though Roger was a Christian and thus Christianity dominated the island, the art and culture present shows a great tolerance and even reliance on other religions and cultures. As with most middle age Christian kings, many churches were built across the island, however the difference lies within the styling of the churches. ...read more.

The tolerance of different religions can also be seen from statistics presented by historian David Abulafia, whom suggests that Sicily?s population was 55% Muslim, 5% Jewish and 40% Christian of which remained similar throughout his reign. If Roger had little tolerance this would not be so. Many thrived under Roger?s multiculturalist ideologies, such as the Arabic cotton manufacturing industry. Roger the II, is one of the first kings to properly establish new laws and writing them down. These laws may seem lacking in tolerance. The Assizes of Ariano contains a law of Apostasy, punishing those whom abandon the Catholic faith, with little exception. This can be seen as Phillip of Mahdia renounces the Christian faith and as such is burnt at the stake, this is surprising as he was very high up in Roger?s court. However this law was not applicable to those who stayed with their religions and as such many members of the Kings court who kept their religion such as George of Antioch who managed to rise high in the Kings court. ...read more.

Nevertheless his thirst for knowledge is still clear and his interest in different cultures clear. His thirst goes to such an extent that he even hired a famous diver to explore the depth of the Straits of Messina in order to discover whether the Greek myths of Scylla and Charydbis, even if this is not true it still acts as a representation for his endeavour of enlightenment. His tolerance for religious difference can also be seen as he is taught by Greek and Arabic monks whom he did not dismiss from his court as many kings would?ve done before him. Historians also suggest that Roger may?ve been quad-lingual, speaking French, Latin, Greek and Arabic, although this is unclear and hard to confirm. In conclusion, ?Enlightened and tolerant of religious difference? is highly representative of Sicily under Roger II and his successors. Sicily was populated by a diverse range of people of which the ratio did not change through this time period. The laws he passed were modern and worthy of even today?s society. Roger?s thirst for knowledge built also built bridges to enlightenment. ...read more.