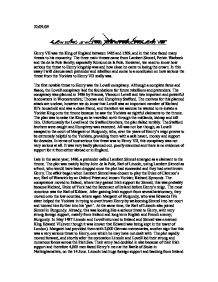 Essay: How serious was the Yorkist threat to Henry VII?

22/09/09 'How serious was the Yorkist threat to Henry VII?' Henry VII was the King of England between 1485 and 1509, and in that time faced many threats to his monarchy. The three main threats came from Lambert Simnel, Perkin Warbeck and the de la Pole family; especially Edmund de la Pole. However, we need to know how serious the threat to Henry kingship was and how close he came to losing the crown. In this essay I will discuss each pretender and rebellion and come to a conclusion on how serious the threat from the Yorkists to Henry VII really was. The first notable threat to Henry was the Lovell conspiracy. Although a complete farce and fiasco, the Lovell conspiracy laid the foundations for future rebellions and pretenders. The conspiracy was planned in 1486 by Francis, Viscount Lovell and two important and powerful landowners in Worcestershire; Thomas and Humphrey Stafford. The motives for this planned attack are unclear, however we do know that Lovell was an important member of Richard III's household and was a close friend, and therefore we assume he wanted to re-instate a Yorkist King onto the throne because he saw the Yorkists as rightful claimants to the throne. The plan was to seize the King as he travelled north through the midlands, kidnap and kill him. Unfortunately for Lovell and the Stafford brothers, the plan failed terribly. ...read more.

The plan was very well planned; it is plain to see that the Yorkists learned from their mistakes from the Lovell conspiracy. Along with support from Ireland, Lincoln showed they had big support from abroad with the backing of Margaret of Burgundy, who greatly helped Simnel. Margaret proved to be a force to be reckoned with, as she gave the rebels military support and money. I believe this threat was very serious to Henry VII as it came as far as a battle which Henry could have so easily lost and was so much more serious than the Lovell conspiracy. However, because Henry won the battle and defeated the rebels, it not only showed everybody he was a great leader and fighter, but also that he would be ruthless in dealing with rebellions, pretenders and traitors. The final threat, and probably most serious threat came from pretender 'Perkin Warbeck'. Perkin Warbeck was the son of a Tournai customs officer born in 1475 who became to impersonate the younger son of Edward IV - one of the 'Princes in the Tower'. It is said that, he was taken Ireland he impersonated Richard, after he had gained a large Yorkist interest. However, Warbeck failed to get support from Irish lords, importantly the Earl of Kildare refused to help him (he had pleaded his loyalty to Henry after his involvement in the Lambert Simnel affair). ...read more.

closer took as he had huge support both in England and abroad and Henry was forced to give up a lot to retrieve him, for example the Treaty of Etaples. However, as I have said Perkin Warbeck never got as far as a final battle for the throne whereas the Lovell conspiracy and Lambert Simnel did. In conclusion, after studying the main Yorkist threats to Henry VII I believe that the threat was considerably serious to Henry. I think that the Lambert Simnel plot was the most serious as he received huge foreign support, from Ireland and Burgundy. Also, it came all the way to a final battle which Henry may have lost, therefore losing the crown and his life, the same can be said with the Lovell conspiracy, if planned a little better Henry would have successfully been captured and most likely executed. Although Perkin Warbeck never got very far in terms of invasions and military action, he had the most backing and protection, again from Burgundy but this time also from Scotland and Emperor Maximilian. Furthermore, it showed Henry that his government and even his close friends could not be trusted, Sir William Stanley for example. Combining the three most serious Yorkist threats I believe that the Yorkist threat was considerably serious to Henry as the plots had received support both in England and from abroad and Henry came very close to losing the throne and his life at the Battle of Stoke. ...read more.