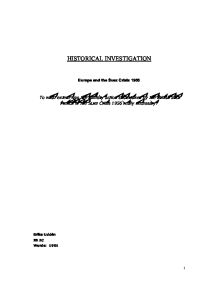 Although it is acknowledged in the preface that there are problems of bias, subjectivity and perspectives in studying the past, the value of reading history "outweigh the drawbacks"10. Carlton�s book is far more analytical than Thomas� and includes different historical interpretations of the Crisis, which is of usefulness when studying the crisis from a broader perspective. However, Carlton�s book might be quite biased as it is very much written from a British perspective. Although both Carlton�s and Thomas�s books are British, they present a different view of the Suez Crisis, probably due to the different date of publication of the sources first edition. Although Thomas rewrote some parts of the book in his latest edition, the most substantial parts of his book, are based on sources available when the condemnation of the military action after the crisis made the propaganda turn against the British and French. In Carlton case, he has made an extensive use of materials released in the 80s, which seem to be friendlier towards he British and the French. By taking both sources in account they tell us how the history of the Suez Crisis has been reshaped due to political controversy and propaganda. D. Analysis If the Suez problem possibly could have been solved in a more diplomatic way, British and French prestige during the Cold War would doubtlessly have been more favorably after the crisis. ...read more.