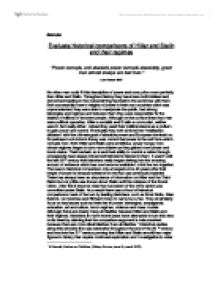 Evaluate historical comparisons of Hitler and Stalin and their regimes

Sara Luke Evaluate historical comparisons of Hitler and Stalin and their regimes "Power corrupts, and absolute power corrupts absolutely, great men almost always are bad men." Lord Acton 1887 No other men could fit this description of power and corruption more perfectly than Hitler and Stalin. Throughout history they have been both idolised and demonised leading to the overwhelming fascination the world has with them. Both successfully rose to heights of power in their own countries which was unprecedented, they were able to manipulate the public, had strong ideologies and regimes and between them they were responsible for the deaths of millions of innocent people. Although on the surface these two men were political opposites, Hitler a socialist and Stalin a communist, neither were in fact really either. Instead they used their political stance as a podium to gain power and control. Eventually they both evolved into "totalitarian dictators" with the ultimate goal of absolute power and European domination. So perhaps Lord Acton's theory was correct that power is the evil force which corrupts men. Both Hitler and Stalin were ambitious, power hungry men whose regimes began to turn more sinister as they gained more power and iconic status. Their barbaric acts and their ability to control a nation through propaganda have always influenced historian's interest in them. It wasn't until the late 20th century that historians really began delving into the amazing amount of evidence which has now become available to link the two together. The reason historical comparison only emerged some 40 years after their height of power is because evidence on the two was previously lopsided. There has always been an abundance of information on Hitler and the Third Reich but very little was known about Stalin until the collapse of the Soviet Union. After this it became clear the true extent of the crime which was committed under Stalin. ...read more.

in 1933 Hitler was made Chancellor and after Hindenberg death he declared himself Fuhrer of Germany resulting in the failure of Blomberg to control him. Stalin's rise to power was somewhat different to Hitler's. He had a small role in the 1917 Russian Revolution. After the revolution he was given many diminutive duties within the Bolshevik party. He was seen as dull and unimportant within the party, and was perceived as being unintelligent, although this wasn't the case. Stalin was grossly underestimated and after becoming the General Secretary he was fighting for the place of leader against Trotsky. The coming months prior to Lenin's death in 1924, Lenin was becoming more concerned about Stalin's character and wrote a number of letters asking for Trotsky's help. Unfortunately Lenin died before any action was taken and Stalin became leader. The comparisons which historians have made about their rise to power is how they were both underestimated, how they came to power almost by accident or pure luck and how both leaders, Lenin and Hindenberg feared them coming to power. Once in power their ambition for complete control was evident. They became so powerful within the party that it was difficult to separate the man from the political system. Both parties were headed by one man and one party who had absolute control over the nation. Politically there are differences between the two, the structure of the party and their organisational and leadership skills differed. Hitler was renowned for being lazy and unorganised and he spent most of the day in bed, Hitler was a "non interventionist dictator as far as government administration was concerned."12 He hated paperwork and was completely non bureaucratic, "It became more and more difficult for Lammers and Meibner to get him to make decisions which he alone could make as head of state... he disliked the study of documents...he took the view that many things sorted themselves out on their own if one did not interfere."13Stalin on the other hand relied on regulation and needed the political system to be organised. ...read more.