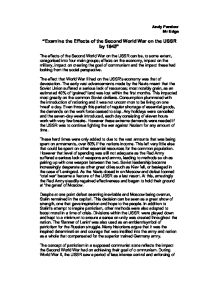 &quot;Examine the Effects of the Second World War on the USSR by 1945&quot;.

Andy Parslow Mr Edge "Examine the Effects of the Second World War on the USSR by 1945" The effects of the Second World War on the USSR can be, to some extent, categorised into four main groups; effects on the economy, impact on the military, impact on creating the goal of communism and the impact these had looking from the social perspective. The effect that World War II had on the USSR's economy was that of devastation. The early vast advancements made by the Nazis meant that the Soviet Union suffered a serious lack of resources; most notably grain, as an estimated 40% of 'grained' land was lost within the first months. This impacted most greatly on the common Soviet civilians. Consumption plummeted with the introduction of rationing and it was not uncommon to be living on one 'meal' a day. Even through this period of regular shortage of essential goods, the demands on the work force ceased to stop. Any holidays were cancelled and the seven-day week introduced, each day consisting of eleven hours work with very few breaks. ...read more.

In addition to Stalin's attempt to inspire patriotism, other methods were also adopted to boost moral in a time of crisis. Divisions within the USSR were played down and kept to a minimum to ensure a sense on unity was created throughout the nation. The 'Banner of Lenin' was also used as an emblem/symbol of patriotism for the Russian struggle. Many historians argue that it was the inspired determination and courage that was instilled into the army and nation as a whole that compensated for the superior trained Germany army. The concept of patriotism in a supposed communist state reflects the impact the Second World War had on achieving their goal of communism. During World War II, the USSR saw a period of less intense control and enforcing of the communist idea. This was to ensure the unity of the nation and as a result it was felt sacrifices had to be made. The censorship of all media as was standard in pre-war times was relaxed as well as other aspects within the party. ...read more.

With victory over a great struggle came a great sense of unity and solidarity. The communist system was then promoted as the reason for their victory and an emotional bond between it and the population was created. Propaganda was also used to display the power of communism and that without having adopted it the USSR would not have been victorious. As the population wanted to prevent any chance of something on such a devastating scale as the second world war had been happening again, all new foreign policy was unquestioned and fully supported. This ensured the future of communism within the USSR and to a certain extent support for what Stalin had achieved bringing them through dark times. Overall the Second World War had a dramatic impact and effect on every aspect of the USSR. Economically the nation was left in ruins with recovery seemingly not possible in the near future. The sheer scale of numbers of war dead and the emotional impact that accompanied it was something than cannot be exaggerated. Avoiding another invasion became the priority of the vast majority of the population, including the leadership, Stalin. The result of this can be seen in the emergence of the developing Cold War between the USSR and the USA. ...read more.