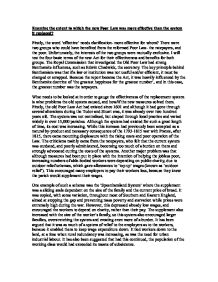 Examine the extent to which the new Poor Law was more effective than the system it replaced?

Examine the extent to which the new Poor Law was more effective than the system it replaced? Firstly, the word 'effective' needs clarification- more effective for whom? There were two groups who could have benefited from the reformed Poor Law- the ratepayers, and the poor. Unfortunately, the interests of the two groups were mutually exclusive. I will test the four basic terms of the new Act for their effectiveness and benefits for both groups. The Royal Commission that investigated the Old Poor Law had strong Benthamite influences, such as Edwin Chadwick, the secretary. The key principle behind Benthamism was that if a law or institution was not useful and/or efficient, it must be changed or scrapped. Because the report became the Act, it was heavily influenced by the Benthamite doctrine of 'the greatest happiness for the greatest number', and in this case, the greatest number was the taxpayers. What needs to be looked at in order to gauge the effectiveness of the replacement system is what problems the old system caused, and how/if the new measures solved them. Firstly, the old Poor Law Act had existed since 1601 and although it had gone through several alterations during the Tudor and Stuart eras, it was already over two hundred years old. The system was not centralised, but shaped through local practice and varied widely in over 15,000 parishes. ...read more.

The first of these terms was the scrapping of outdoor relief, so relief would no longer be given to the able-bodied poor. This was to stop the increasing burden that systems like the Speenhamland System placed upon taxpayers. Unfortunately, this did not encourage employers to pay their workers more, so the workers were suddenly suffering an income deficit, and even if healthy enough to work, could still not feed themselves or their families without help. This was vastly more financially effective than the old system, as we can see from statistics showing the cost of poor relief, which fell from 6.79 million pounds in 1833 to 3.74 million in 1840. This shows that the new system was more financially effective than the system it replaced, reducing the burden on the taxpayers. However, it was less effective at reducing the burden on the poor, as it drove many into the workhouse system, which was also undergoing radical change. The situation however, was not as bad as it could have been, due to several good harvests, which kept the price of bread down, and the jobs created by the newly emerging railway industry. Prior to the Poor Law Amendment Act, conditions in a typical workhouse were not appalling. A typical diet from a pre-1843 workhouse shows 'unlimited thick broth, beer, boiled pickled pork with vegetables'. However, steps were taken to make the option of going to a workhouse as unattractive as possible, so people would make every effort to find work, because conditions were deliberately made more miserable than the conditions of even the poorest worker. ...read more.

The quality of these officials varied from workhouse to workhouse- some were genuinely compassionate people, such as a decorated naval officer, whose inmates cried at news of his retirement. Many more were brutish, ill-educated and drunkards, who used their position to steal monies meant for food, abuse inmates and commit other offences. The effectiveness of these instituted officials varied on their personalities, and it is impossible to gauge the overall effectiveness either for the ratepayers or the paupers, because of this great variation. In conclusion, when gauging the effectiveness of the Poor Law Amendment Act, it has to be broken down into two- the effectiveness of the Act on the poor, and the effectiveness of the Act on the taxpayers. Bearing in mind that the Act was written from the recommendations of the Royal Commission, which had strong Benthamite influences, it is unsurprising that the Act was aimed at reducing the burden on the taxpayers. The needs of the poor were largely ignored, treated as malingerers, and little provision was made for them in the new act. The Poor Law Amendment Act was carefully crafted to reduce the amount being spent on poor relief, however, it could be argued that by removing dependence, it forced the poor to actively seek work, and pull themselves out of their situation. Although the new system barely lasted a year before more reforms occurred, and indeed in some places it was never fully implemented, such as in the North, where to get rid of outdoor relief would mean sure death for hundreds of poor people, ...read more.