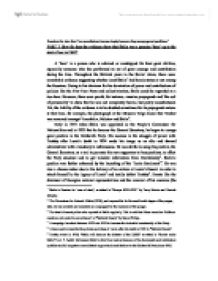 Examine the view that &amp;#145;we manufacture heroes simply because they occupy great positions.&amp;#146;

Examine the view that 'we manufacture heroes simply because they occupy great positions.' PART 1: How far does the evidence show that Stalin was a genuine 'hero' up to the start of war in 1941? A 'hero' is a person who is admired or worshipped for their great abilities, especially someone who has performed an act of great courage and contribution during the time. Throughout the Stalinist years in the Soviet Union, there were remarkable evidence suggesting whether Josef Stalin1 had heroic status or not among the Russians. Owing to his charisma for his domination of power and contributions of policies like the Five-Year Plans and collectivization, Stalin could be regarded as a true hero. However, there were proofs, for instance, massive propaganda and 'the cult of personality' to show that he was not completely heroic, but partly manufactured. Yet, the liability of the evidence is to be doubted sometimes for its propaganda nature at that time, for example, the photograph at the Moscow Volga Canal that Yezhov was removed amongst Voroshilov, Molotov and Stalin2. Early in 1917 when Stalin was appointed as the People's Commissar for Nationalities and in 1922 that he became the General Secretary, he began to occupy great position in the Bolshevik Party. ...read more.

These showed Stalin's mistakes and his use of Dekulakisation squads13 and OGPU14 made it crystal clear that his talent was limited since he had to apply force to suppress possible enemies. Therefore, there was evidence about Stalin being manufactured as a hero figure. Furthermore, in order to hold on to his power, Stalin triggered the Great Purges15 and a series of show trials16 within the Party to bundle away any threats (all the Old Bolsheviks who were associated with Lenin) after the murder of Kirov17 in 1934. Undoubtedly, the massive murder provided a safe position for Stalin's dictatorship, but Stalin ignored its influences for the state and the upcoming war, for instance, in 'Yezhovschina'18, many members in the secret police and the red army were killed and weakened the armament of the state, so that there was insufficient soldiers to fight against the n**i Germany in 1941. His ruthlessness was totally exposed to make him a hero, however, it can be argued that if Stalin were a real hero, he would use his own abilities rather than great terror to gain applause and eliminate enemies. Last but not least, during 1930s, Stalin's promotion of the 'cult of personality' brought about his popularity and worship from the majority. ...read more.