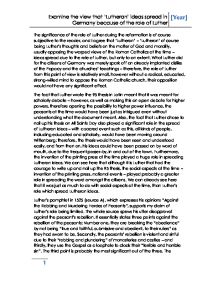 The significance of the role of Luther during the reformation is of course subjective to the reader, and I agree that 'Lutheran' - 'Lutheran' of course being Luther's thoughts and beliefs on the matter of God and morality, usually opposing the warped views of the Roman Catholics at the time - ideas spread due to the role of Luther, but only to an extent. What Luther did for the citizens of Germany was merely spark off an already implanted dislike of the Papacy and the churches' teachings - therefore, the role of Luther from this point of view is relatively small, however without a radical, educated, strong-willed mind to oppose the Roman Catholic church, their opposition would not have any significant effect. The fact that Luther wrote the 95 thesis in Latin meant that it was meant for scholarly debate - however, as well as making this an open debate for higher powers, therefore opening the possibility to higher power influence, the peasants at the time would have been just as intrigued even without understanding what the document meant. ...read more.

The third point is probably the most significant out of the three. The peasants use the Gospel as a way to justify their actions as shown in Source B, the 12 Articles of Memmingen in which the peasant's state that "All these demands to be tested by scripture and if not in agreement therewith, to be withdrawn". This phrase of course echoes Luther's statement at the Diet of Worms - therefore, this shows that Luther's role is somewhat significant if the peasants choose to follow after him. However, relating back to source A, the fact that the peasants "misinterpreted" Luther's ideas and intentions so severely must only mean that they themselves sought a rebellion which shows that their hatred and dislike for the papacy was only waiting for an excuse to be sparked off. The image of "Christ's Sheepfold" (source C) is an example of propaganda against the Roman Catholic Church. It illustrates the corrupt nature of the Pope as he destroys Christ's house - this relates to Luther's statement of him being the antichrist. ...read more.

It is safe to say that without Frederick, Luther would have just been as well off as Hus - therefore, if one must argue that the role of Luther is significant at all, they must also take into consideration Frederick of Saxony, as it was also he who prevented the execution of Luther. It would be with huge ignorance to state that Luther played an insignificant role in the reformation as it was he who had the courage to stand up for what he believed, even with the knowledge that he could be sentenced to death as a heretic. However, to state that the role of Luther was the most significance holds some obstacles - the time in which Luther chose to rise up against the church was perfect with the invention of the printing press and the help of others - e.g. Saxony - however, it is easy to conclude that Luther was merely a pawn (as shown in source B) which the peasants manipulated to gain what they wanted. A violent and bloody reformation. ?? ?? ?? ?? Examine the view that 'Lutheran' ideas spread in Germany because of the role of Luther [Year] 1 ...read more.