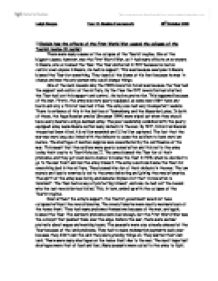 1) Explain how the effects of the First World War caused the collapse of the Tsarist regime (8 marks) There were many causes of the collapse of the Tsarist regime. One of the biggest causes, however, was the First World War, as it had many effects on everyone in Russia, who all blamed the Tsar. The Tsar abdicated in 1917 because he had no control over anyone in Russia. He had no support. This was because everyone in Russia blamed the Tsar for something. They layed all the blame at his feet because he was in charge and was the only person who could change things. One of the main reasons why the 1905 revolution failed was because the Tsar had the support and control of the military. By the time the 1917 revolution had started, the Tsar had lost this support and control. He had no protection. This happened because of the war. Firstly, the army was very poorly equipped, as some men didn't have any boots and only a third of men had rifles. The army also had very incompetent leaders. There is evidence of this in the battles at Tannenberg and the Masurian Lakes. In both of these, the 'huge Russian armies' (Brooman 1994) were wiped out when they should have easily beaten a single German army. The poor leadership combined with the poorly equipped army made Russia suffer many defeats in the war. By 1917, 0.8 million Russian troops had been killed, 4.6 million wounded and 3.3 million captured. The fact that the war was very long also linked with the defeats to cause the soldiers to have very low morale. The shortage of medical supplies was exacerbated by the continuance of the war. This meant that the soldiers were poorly looked after and this led to the army losing their loyalty to Tsar Nicholas II. The army blamed the Tsar for all their problems, and they got even more chance to blame the Tsar in 1915, when he decided to go to the war front and run the army himself. ...read more.

Also, they wouldn't have been pressurised to withdraw from the First World War. Therefore, the Provisional Government would not have been unpopular and would have been doing a good job. The people of Russia would not have been looking for an alternative government and the Bolsheviks would not have succeeded in their plan to take power. Even with the Provisional Government looking weak and the people wanting a new government, the Bolsheviks may not have been the replacement without looking strong themselves. They had a very strong and effective leader: Lenin. Lenin was a strong leader because he promised to give the people what they wanted, an end to the war. Without the First World War, he would not have been able to do this and wouldn't have looked half as strong as he did with the war going on. Lenin was a popular leader because he made himself look like a worker and made the people think that he was one of them. He knew what the people wanted and said things that the people wanted to say but didn't know how. He was a 'man of iron will and inflexible ambition' and made 'brilliant speeches' that 'inspired the workers and soldiers to a determined struggle'. He planned the entire revolution and was very popular amongst the people of Russia. Lenin took advantage of the fact that there was a war going on. He saw that the Provisional Government was weak and very unpopular because of the war and he knew that the people wanted the war to end. Therefore, that is what he offered them, an end to the war and an end to all of their problems. Without the First World War, Lenin would not have been able to do this and wouldn't have looked as strong. The people of Russia would have chosen another party to take over from the Provisional Government. This factor is inextricably linked with the Leigh Sangan Year 11 Russian Coursework 28th October 2003 ...read more.

This is a high quality, well written response overall that displays plenty of knowledge and understanding of Russia's predicament in 1917. At times, the understanding of what happens in October is a little simplistic and the final response lacked a conclusion. Always leave time for this. 4 out of 5 stars.